Practice of the Week
Rethinking Genesis
Category: Ecospiritual. These practices are oriented toward developing our spirituality through our connection with our planet home and our responsibility to care for it. 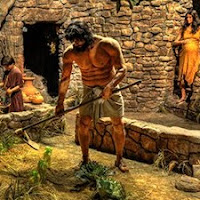 The Genesis story of creation and fall gave rise to cultural attitudes about the natural world that remain with us today. The fall narrative of Genesis 3 is viewed by some as an allegory for the transition from a hunter-gatherer lifestyle to an agricultural one, by others as a culturally symbolic tale of the demotion of some deities and the ascendance of others, and by still others as showing the favor of a deity for the lifestyle of nomadic pastoralists over a lifestyle of sedentary farming. Perhaps Genesis 3 is all of these.

The story originated in the Fertile Crescent, the birthplace of Western civilization, a written language, agriculture, and the beginnings of the rule of law. Judaism, Christianity, and Islam all trace their roots to this area.

At Genesis 3:17 God curses the Earth. The soil is literally cursed, and Adam must then struggle to extract a living from it. Instead of experiencing Earth as holy, which was (and is) the norm for indigenous cultures around the world, the cultural heirs of Genesis viewed the Earth as a vehicle for punishment, an enemy, a cursed thing, filthy and corrupt. (The association of women with all things earthly certainly did nothing to enhance their status.) The Earth-as-enemy idea grew and morphed over time. By the late Middle Ages, the dominant worldview declared that to reject all earthly things—including bodily functions and desires—was the path to godliness. Gradually, as the medieval mindset gave way to earliest modernity, the overt story of Genesis faded somewhat, but the underlying paradigm remained. Total mastery of the Earth became a driving vision of the Enlightenment and subsequent Industrial Revolution. Suddenly we were in charge. We built cities and factories. We moved away from the farms, from the muck and mud of a life lived close to Nature. We invented technologies. We cured diseases. And today, we live our lives in shrink-wrapped sterility, disconnected from the natural world and its processes.

The Western cultural drive to control and dominate the natural world stems from the deep taproot of the Genesis narrative. Our path of un-learning requires knowing social milieu around us and letting go of the cultural paradigm in which the Earth is cursed, corrupt, and in need of domination.


Practices
1. Journaling: Reflect on Genesis 1-3. Slowly read chapters one through three of Genesis. In your journal write about your reaction. Has your attitude toward Genesis changed? If so, how?

2. A Blessing Meditation. Find a quiet place outdoors. Consider all that is needed for life--air, water, food, shelter, energy, and so on. Consider all that makes life more than simply existence, such as beauty, inspiration, connection, and love. Now, either aloud or silently, recite a litany of how you are blessed by the Earth. For example:
Make your litany both personal and universal. See yourself as a part of the Earth, and contemplate what it means to be blessed.


Group Activities
Giving Voice to Genesis. Stage an impromptu improvisation of the story of Genesis 3. Assign various group members to play the parts of Adam, Eve, God, and the Serpent. Then assign someone to play the part of the Tree of Knowledge, the Tree of Life, the Earth itself, the rivers of Eden, and the other animals and plants. Consider playing it out as written, and then trying it again, this time letting the story flow freely, without a predetermined outcome. See how the story unfolds when more characters speak than the traditional few. Afterward, reflect on the experience, and allow characters to add any insights that were not spoken during the improvisation.


“Look at the birds of the air; they neither sow nor reap nor gather into barns, and yet your heavenly Father feeds them. Are you not of more value than they? And can any of you by worrying add a single hour to your span of life? And why do you worry about clothing? Consider the lilies of the field, how they grow; they neither toil nor spin, yet I tell you, even Solomon in all his glory was not clothed like one of these.” (Matthew 6:26-29)

“In his hand are the depths of the earth; the heights of the mountains are his also. The sea is his, for he made it, and the dry land, which his hands have formed. O come, let us worship and bow down, let us kneel before the Lord, our Maker! For he is our God, and we are the people of his pasture, and the sheep of his hand.” (Psalm 95:4-7)

“You make springs gush forth in the valleys; they flow between the hills, Giving drink to every wild animal; the wild asses quench their thirst. By the streams the birds of the air have their habitation; they sing among the branches. From the lofty abode you water the mountains; the earth is satisfied with the fruit of your work.” (Psalm 104:10-13)