Practice of the Week
The Shower-Write Practice
Category: Occasional, or Worth a Try. These are practices suggested for "every once in a while," or "give it a try," or "as needed." You may find it so valuable that you stick with it, and it becomes a Key Supporting Practice for you. Some of them are responses to a particular need that may arise; others are simply enriching occasional enhancements to the spiritual life. All of them are worth a try at least once. And any of them might become a regular and central part of your spiritual practice. 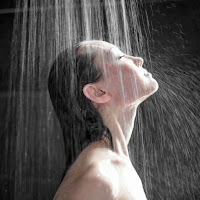 Our minds can sometimes fall victim to thoughts/feelings that spin out of control, resulting in a feeling of high anxiety and overwhelm. Times of great stress can drive us to seek escape (drugs, alcohol, binge eating, or various other addiction/escapist moves) – though escapes only make matters worse.

SHOWER. Begin with a warm shower, then gradually make it cooler and cooler until it is very cold. Finally, end the shower by making the water very warm. A simple ten-minute shower like this can powerfully change how you think and feel.

WRITE. As soon as you’ve dried off, write down: “Three small steps I can take to better handle the things going on in my life.”

I once had a client, Linda, who periodically became overwhelmed by the demands of her life. When this happened, she would drink her way into oblivion, or become suicidal. After a couple of suicide attempts, she sought my professional help. Linda wanted to avoid anti-depressant medication because normally she wasn't depressed. In fact, she was often quite happy—but would occasionally become subject to intense feelings of fear. I suggested that, upon the first symptoms of feeling highly stressed or having suicidal thoughts, she take a shower, adjusting the water temperature as described.

Linda tried my suggestion the next time she felt overwhelmed, and was amazed at the results. However, she told me that after a few hours, the fearful thoughts returned. After all, the stressful situations in her life still existed. That’s when I told her to add the WRITE part. The next week when Linda returned to my office, she exclaimed, “It worked!”

Since creating this dual approach to handling feelings of overwhelm, I've used it with dozens of clients. They have all found it to be a practical and effective way to feel they are back in charge of their life.

Why does the shower-write practice work? Basically, our feelings are the result of sensations in our body combined with the focus of our mind. When we feel overwhelmed, it usually stems from trying to focus on all the problems we have or all the things we need to do. Inevitably, this leads to a feeling of stress in our body. Unfortunately, like a microphone caught in a feedback loop, the tightness of our body can lead to focusing even more on the problems we face. Soon, our emotions can be wailing out of control. Fortunately, this unpleasant cycle can be avoided. Showering relaxes your body and changes the focus of your mind. Going from warm, to cold, to hot water helps to “flush” your emotions through your body, leaving you feeling relaxed and renewed.

After the shower, simply get a piece of paper and write down your “anti-overwhelm” list, under the heading: "Three small steps I can take to better handle the things going on in my life.” Write down anything that occurs to you -- just get it out of your head and onto the paper, but make sure you have at least three things.

In addition to SHOWER and WRITE, there’s a PRE-STEP and a FOLLOW-THROUGH.

PRE-STEP. Help yourself know when it’s time to utilize this practice. Each person reacts to stress differently, so it's important to know the first signs that your emotions are careening into trouble. Ask yourself, “In previous times when I've felt overwhelmed, what were the first signs I was losing control?” Write your answer down on paper. This will help you recognize when to head for the shower.

FOLLOW THROUGH. Once you have a list of small actions you can take to handle the stress in your life, prioritize them. Ask yourself, “What's the most important thing to handle first?” Then, keep prioritizing them until you have a list of action steps, from most to least important. Finally, when you feel ready, take care of the first item on your list. By taking action, you'll feel better. You'll get out of your thinking mind and into taking care of the situation at hand. The experience of being overwhelmed results from a lot of thinking and little or no action. As you take even small steps to improve the situations at hand, you'll feel back in charge.

Sometimes people are so good at avoiding a problem that they don't even know a situation is overwhelming to them. To avoid unpleasant feelings, they stay in denial, or distract themselves a thousand different ways. For example, I had a client named Mark who had been in a very destructive relationship with his wife for a long time. Yet, he avoided ever trying to improve the relationship because, any time he thought about it, he felt inundated by fear. I suggested he try the Shower-Write Practice. Just to get him started, I told him not to worry about the follow-through part. “Just write down three steps; you don’t have to do any of them,” I told him. To his pleasant surprise, Mark not only wrote down five small things he could do, but he acted on three of them. When he excitedly walked into my office the next week, he reported, “I now have some hope. While our relationship still needs a lot of help, it feels a hundred percent better than it did last week."

If you live with people, ask them to remind you to use this method the next time you seem out of sorts. When you can quickly turn your fear into positive action, you'll avoid a lot of needless suffering, and you'll be well on your way to a happier and healthier life.