Dear Ones and Fellow Unitarian Universalists,

The Mouse. For those who didn't hear it on Sun Jan 3, my sermon concluded with:

Your ultimate intention will have some connection with bringing good into the world. I was reminded this week, though, that it doesn’t always, continuously do good. Sometimes it’s just what you do, and it’s just who you are, even when you know it won’t do any good.

A couple days ago – on New Year’s Day, in fact, Friday morning – I was downstairs in the basement zendo. I had finished my morning meditation and sutra recitations, and was on my out when I encountered by the door: a mouse. The Parsonage has mice, occasionally, though there’s been no sign of any for over a year. When we have them, we set out live-catch traps, and then the mice in a wooded area down the street. But this mouse, when it saw me, stumbled along the baseboard a few inches and stopped.

Her feet were oddly placed, and her head unusually tilted. This was clearly not a well mouse. Fortunately, I live with a veterinarian. “LoraKim,” I hollered. “Would you come down here please?” She came. Saw the situation. Went and got a dish towel and a cardboard box. Throwing the towel over the mouse she scooped it up and put her in the box.

There was no mention of depositing her in the woods down the street – sick like that, she wouldn’t stand a chance. So three times a day – today being the third day of this – LoraKim has been going downstairs to check on the mouse. She changes the newspaper, feeds her honey water with a syringe, changes out the peanut butter, apple slice and potato slice for fresh food. Suspecting a bacterial infection in the neurological system, she administers an oral antibiotic twice a day.

The mouse hasn’t been eating. Yesterday afternoon, there were no droppings, and the food wasn't touched. Bad sign. So this morning when we went to check, we expected to find a dead mouse in the box. But she was still breathing. A little friskier than before. Her balance is clearly off and she’s still got the odd head tilt – but we think less so than yesterday.

Is this doing any good? It’s hard to see that it is. If you said to me, “this mouse is suffering; the greater kindness would be to put it out of its misery,” I wouldn’t have any basis for contradicting you. I might shrug and maybe say, "Well, the same might be said of me." And maybe add that our best guess about what the mouse wants is that she wants to live. For one more day. For two more days. Maybe for one more week.

If she keeps getting better, at some point we will release her in the woods down the street because she’s a wild creature and she’d rather take her chances in the wild than live in a box – even though we know those chances are pretty slim. What chance does a neurologically impaired mouse in an unfamiliar woods have? Either way, the little one is almost certainly not long for this world.

So what the good of LoraKim’s care? Sometimes it’s not about the good. It’s about LoraKim amd me (me, with a somewhat lesser skillset and less intrinsic commitment to rodents) – living our intention to serve life. We trust that this intention will often do good – but don’t expect that it always will.

In this New Year, may we all know our intention, and find ways to live it.

UPDATE. Within 24 hours of the Sunday service at which I spoke of that encounter, the mouse was evidently well enough to chew through the box and escape. We discovered her departure on Monday morning, less than 72 hours after initial encounter. The box she departed had a number of droppings, and before she left she made a goodly dent in her food -- good signs that she was well enough to make her way forward.

I was reminded of a Chuck Brodsky song about a small town where the law officer handled public drunkenness this way:

The sherif kept the keys
To the lockup on the table
Where a sober man could reach ‘em
Just as soon as he was able.

(I have come to see such homey tales of lenient law enforcement through a racial lens, and wonder if white offenders are being assumed. Maybe. And then there's the gender lens...)

In any case, we were happy to have the mouse be free as soon as she was well enough to free herself. On Tuesday morning, there were signs that she -- or possibly some other mouse -- had been in the kitchen. Since then, there have been no further signs. She may have made her way outside. 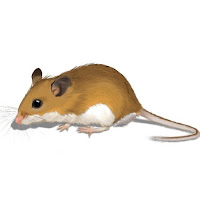 BACKGROUND. She (just randomly assigning a gender here -- we made no sex determination) was a deer mouse, "only distantly related to the common house and laboratory mouse," (says Wikipedia). Deer mice only rarely enter residential homes, though they can be a pest in farming areas, and may inhabit vacation homes, outbuildings, and sheds. They can transmit Hantavirus Pulmonary Syndrome -- so LoraKim was always gloved and masked when working with the little creature.

For the winter, we'll be highlighting some SLOGANS TO LIVE BY. While the "Might Be Your Thing" practices featured in autumn might also NOT be your thing, these slogans are for everyone -- reminders to carry with us at all times; little nudges that nudge us in the direction of spiritual health and fulfillment. These practices don't require setting aside a separate substantial chunk of time -- but they will slow you down a bit (and that's a good thing.) Resolve to get stronger at living by these maxims, day by day. Sometimes make one of them the focus of your daily journaling.

For the third week of winter, our SLOGAN TO LIVE BY is: Stay Close to Your Resentment. The post about this slogan explains why and how this slogan is important and helpful.

Dealing with These Times

These thoughts from my colleague UU minister, Rev. Jason Cook, may be helpful:

What we are witnessing at this time:

This is normal, folks.

Well, normal in one sense: for anyone who has ever been in a relationship with a full-fledged malignant narcissist, or had a deeply narcissistic boss, or has a narcissist for a parent or sibling—you know.

One of the things a narcissist hates is to be removed from power, or left behind, or broken up with. They rage. Their remaining narcissistic supply rages in their defense. They’ll destroy all they can on the way out or seek to destroy you on your way out.

What can you do to protect yourself? Well, the number one thing is to not engage. You aren't going to change them for the better by staying in relationship with them; you'll simply deplete your own emotional resources and sense of self-worth. Cutting off all contact with a malignant narcissist is the best form of self-protection there is, though sometimes that’s impossible to do because of logistical reasons. Whether you are able to strictly observe no contact or whether you simply set some healthy boundaries for yourself, the narcissist will rage in response (after all, they didn't get their way), their supply will continue to be worked up, and you’ll continue to think about them and feel a whole host of difficult emotions. You’ll have to re-train your thoughts so you stop thinking about them--which isn't easy because you've been conditioned to be hyper-vigilant to their feelings and needs. You’ll have to do a lot of personal healing work. And it will take time.

The good news is that we are really and truly breaking up with that person. And it’s going to be painful in the days ahead — it will continue to follow the pattern of what it looks like to disengage from a narcissist, but on a grand scale, of course. But this is not the great unknown we are in: this is part of an understood pattern of human behavior.

If we keep that in mind — and stay on our toes — we will get through this.

Stay vigilant. Disengage emotionally. Spend time healing. Lean on others doing the same work. Remember to ground yourself in love.