From the Minister, Thu Dec 7

Greetings from Ometepe island, in the Lake Nicaragua!

Among my "extra-curricular" duties is being on the six-member board "One Earth Conservation" (OEC) -- the nonprofit organization founded by my spouse, LoraKim, and Gail Koelln, a UU of the Shelter Rock congregation. As a part of this work, LoraKim travels half-a-dozen or so times a year for trips of 10 days to two months to various locations in Latin America: mostly to Guatemala, Honduras, and Nicaragua, though she has also been a few times each to Guyana and Paraguay. She works with local groups concerned to preserve their parrots.

One of the OEC board members is Honduran and lives and works as a biologist in Honduras; the rest are US Americans. Of these, I've visited an OEC project once before (a year and a half ago, in the Mosquitia region of Honduras), but the other board members had no direct experience of the work they oversee. In addition to affording some hands-on exposure for the OEC Board, this trip also includes four others representing OEC's pilot experiment in offering eco-touristry experiences that (a) allow participants to learn about the various forces threatening native species, particularly parrots, (b) assist the actual work of the conservationists, and (c) help fund the conservation projects.

We began with a seminar-style presentation about the project, Nicaraguan history, and the status of the Ometepe parrots. We know that the primary threat is poaching: people stealing the chicks from the nests to sell throughout Central America and Asia to people who think it's cool to have a parrot in their house. (Import of wild birds into the US has been illegal since the Wild Bird Conservation Act of 1992, and has been banned in Europe since 2007.) The T-shirts worn by the Nicaraguan team of conservationists elegantly yet forcefully make the point: over a picture of a Yellow-nape Amazon parrot are the words "Tu casa no es mi casa" (Your house is not my house.)

We spent time in the field watching the young men of the local conservation team climb trees to see if the nest cavities were active this year. When they find active nests, they alert patrol volunteers to watch the trees to try to prevent poaching. The patrol effort is woefully understaffed, so the poaching, sadly, is slowed less that we'd like.

For two hours each day -- from 1.5 hours before sundown to half an hour after -- we split into teams of three or four to go to various high-ground spots to count the parrots we see as they head from wherever they've been feeding to wherever they're going to overnight. The parrots fly by, usually in twos or threes, sometimes in flocks of 40 or 50. The team leader carefully records the time of each sighting, the number of parrots seen, the species (almost always one of three: yellow-nape Amazon, red-lored Amazon, or Pacific parakeet), and the direction of travel. Later LoraKim and the team leaders will sit down to look carefully at the records and determine which sightings were the same parrots passing by multiple observation spots.

LoraKim estimates there are probably about 1200 yellow-nape and 400 red-lored left on Ometepe. But it's important to gather the data for more accurate estimates each year. If we can document how much poaching is occurring, and document how effective the conservation efforts are in reducing poaching, the efforts can build support -- both in the hearts of the people, and from funding agencies.

Other field trips show us other efforts on behalf of sustainable ecology:
There's reason for hope for this planet's bipeds, feathered and featherless. Also reason for despair: the poachers have developed better suitcase-sized incubators and are now stealing eggs rather than chicks. While we are there, a pall is cast by the news of some foreign visitors on the island putting out word that they are looking to buy parrot eggs or chicks.

The day before we arrive, a young boy finds a fledgling yellow-nape Amazon walking by the road. He can't fly yet -- but he gave it a try and found himself stranded on the ground. The boy throws a cloth over him, takes him home, and contacts the conservation team (whew!). The next day, LoraKim and I arrive to pick up the bird to take a stint of caring for him until he can be released -- this will take several weeks, says LoraKim, so in the few days we'll be on the island we're just hoping to get the process off to a solid start. "Time-bomb" as we name him, expecting him to explode on us at any time, doesn't yet know what eating is --  he's only had food pushed down his mouth so far. He's very angry about being away from home. LoraKim boils dry dogfood until it makes a smooth mush. She slides a tube down Time-bomb's throat and injects the mush into his crop while I do my best to hold him still. He doesn't like this one bit -- but when we're done he seems to notice that it feels better to have some food in him. Over the next few days, he gets less angry -- comes to see us as his flock rather than predators. He learns to eat from a syringe, without the tube down his throat. Then he learns to reach out on his own to take bites of food from a bowl. All the while he's living in our hotel bathroom, which we've tried to make suitable habitat by putting most of a small tree in the shower stall. Before we leave, we'll transfer Time-bomb to a family that can take care of him until he can be released. We're worried that he's too acclimated to people. We're worried that without his parents and a parrot flock, he'll be an easy mark for a hawk. But he might make it. Right now, we're Time-bomb's best bet to keep ticking.

The Tuesday coffee chat resumes on Dec 12, 3-5pm -- for anyone who might find that a convenient way to get together with their minister.
Drop by if you can! You can also make an appointment to see me at CUUC, or invite me to visit your home. Call Pam at the church office (914-946-1660) to schedule either. 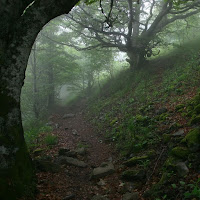 Begin the Ecospiritual Path. We who live in the industrialized West may find it uncomfortable to face the painful reality of the damage our culture has inflicted upon other people and the Earth itself, as well as dysfunctional aspects of our culture such as consumerism. We may even feel guilty and ashamed. Nevertheless, it is critical that we walk this path since its truth is often glossed over and ignored in favor of business as usual. READ MORE 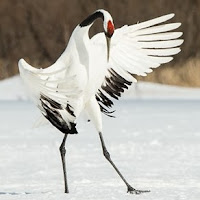 The Holy Spirit. What kind of thing is an idea? How does your idea of idea relate to your faith?


Reverend Crane invited Raven and her students to an ecumenical service at the Little Church in the Grotto. Afterward the Tallspruce community was abuzz about the experience. The next evening Owl asked, "Is the Holy Spirit something like Buddha-nature?"
Raven said, "The two ideas are similar."
Owl asked, "Then Christianity and Zen are somehow linked?"
Raven said, "No, not at all. They are totally different and distinctly separate."
Owl was silent for a moment. Then she asked, "How are they different?"
Raven said, "Their ideas of idea are different."
Owl asked, "How are their ideas of idea different?"
Raven said, "One has eternal life, and the other expires before sunset."


Being as the light is, rising, setting,
Tracelessness is granted -- joy enough.
Two snags, to be avoided if one can, or incorporated:
The ideas of eternal life, and the eternal life of ideas.

Other News for Sun Dec 10
RE News
Music News
This Week's e-Communitarian
Practice: Begin the Ecospiritual Path
Posted by Rev. Meredith Garmon at 18:21

Email ThisBlogThis!Share to TwitterShare to FacebookShare to Pinterest
Labels: ES, From Minister