Practice of the Week
Unitask
Category: Occasional: These are practices suggested for "every once in a while." Some of them are responses to a particular need that may arise; others are simply enriching occasional enhancements to the spiritual life. All of them are worth a try at least once. And any of them might become a regular and central part of your spiritual practice.


“Mindfulness means paying attention in a particular way: on purpose, in the present moment, and non-judgmentally... When we commit ourselves to paying attention in an open way, without falling prey to our own likes and dislikes, opinions and prejudices, projections and expectations, new possibilities open up and we have a chance to free ourselves from the straitjacket of unconsciousness.” (Jon Kabat-Zinn) 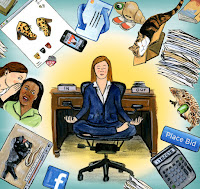 In our busy lives, how often do we find ourselves doing more than one thing at a time? Many days, it seems that multi-tasking is an ingrained part of life.

For ONE WEEK stop multi-tasking. Sounds simple, right? Try it and see how it feels. You may find you want to do this all the time -- not just occasionally.

For example, work on the computer without the TV or radio on, or drive the car without listening to the radio or a CD. Exercise or eat in silence. When you fold the laundry, only fold the laundry, without also talking on the phone or watching TV.


"Research conducted at Stanford University found that multitasking is less productive than doing a single thing at a time. Multitasking reduces your efficiency and performance because your brain can only focus on one thing at a time. When you try to do two things at once, your brain lacks the capacity to perform both tasks successfully. Research also shows that, in addition to slowing us down, multitasking lowers your IQ." (Udemy course description)

"The world’s greatest fictional detective is someone who knows the value of concentration, of “throwing his brain out of action,” as Dr. Watson puts it. He is the quintessential unitasker in a multitasking world. More often than not, when a new case is presented, Holmes does nothing more than sit back in his leather chair, close his eyes and put together his long-fingered hands in an attitude that begs silence. He may be the most inactive active detective out there. His approach to thought captures the very thing that cognitive psychologists mean when they say mindfulness. When we learn to unitask, to think more in line with Holmes’s detached approach, we may be doing more than increasing our observational prowess. We may be investing in a sounder mental future — no matter how old we are." (Maria Konnikova, "The Power of Concentration," NYTimes)

"Every day, I call my mother in the assisted living facility where she now lives, back in France. Every time, I struggle with staying present with her, as she keeps on asking the same questions, over and over again. Is everyone ok? When do I see you next? How is the oldest one (my daughter)? How is baby (my brother's child)? Boredom sets in, and I catch myself multitasking. Glancing at computer screen, checking on latest tweets, reading the news, . . . meanwhile talking to her. Today, I purposely resisted the urge, and chose to only be with her. And found a whole stack of emotions, underneath boredom. First, was aversion to situation, wishing for times past without Alzheimer's. Then, came sadness, from the irrevocable loss. Then, empathy for her, and what must be a terrifying experience. Today, I make another vow. To 'unitask', as much as possible." (Marguerite Maneau-Rao)

For Journaling
How does doing one thing at a time feel?

* * *
For list of all weekly practices: "Practices of the Week Index"
Posted by Rev. Meredith Garmon at 16:08

Email ThisBlogThis!Share to TwitterShare to FacebookShare to Pinterest
Labels: Occasional, OTJ, Practice of the Week