Practice of the Week
Be Curious

Cultivate "Don't Know Mind." When we think we know, we aren't curious. Peace, joy, and connection aren't about what you (think you) know. Rather, they come from shedding the need to know, letting go our attachment to security of knowledge, and always being open to the surprise of the this moment.

Adapted from Rick Hanson, Just One Thing. [Order a copy for yourself: HERE]: 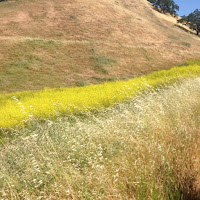 A couple years ago, my father and I were driving to the ocean, near where I live north of San Francisco. Born on a ranch in North Dakota in 1918, he's a retired zoologist who loves birds, and I wanted to show him some wetlands.

The twisting road was carved from the side of coastal hills plunging to the sea. After a while we paused at a pull-out for a pit stop. Returning from the bushes, I found my dad scrutinizing dried, scraggly grasses sticking out from the mini-cliff next to our car. "Look, Rick," he said excitedly, "see how the layers of dirt are different, so the plants growing in them are different, too!" He sounded like a little kid who'd discovered an elephant in his backyard.

But that's my dad: endlessly curious, never bored. I and ten thousand other drivers had sped around that turn seeing nothing but another meaningless road cut. But he had not taken the commonplace for granted. He wondered about what he saw and looked for connections, explanations. For him, the world wears a question mark.

This attitude of wonder, interest, and investigation brings many rewards. For example, engaging your mind actively as you age helps preserve the functioning of your brain. Use it or lose it!

Plus you' gather lots of useful information — about yourself, other people, the world — by looking around. You also see the larger context, and thus become less affected by any single thing itself: not so driven to get more of what you like, and not so stressed and unsettled by what you don't like.

As our daughter once pointed out, curious people are typically not self-centered. Sure, they are interested in the inner workings of their own psyche — curiosity is a great asset for healing, growth, and awakening — but they're also very engaged with the world and others. Maybe that's why we usually like curious people.

To begin with, curiosity requires a willingness to see whatever is under the rocks you turn over. Usually it's neutral or positive. But occasionally you find something that looks creepy or smells bad. Then you need courage, to face an uncomfortable aspect of yourself, other people, or the world. In this case, it helps to observe it from a distance, and try not to identify with it. Surround it with spaciousness, knowing that whatever you've found is just one part of a larger whole and (usually) a passing phenomenon.

With that willingness, curiosity expresses itself in action, through looking deeper and wider — and then looking again. 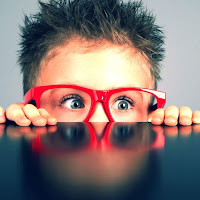 Much of what we're curious about is really neat, such as the development of children, the doings of friends, or the workings of a new computer. And sometimes it pays to be curious about some sort of issue. As an illustration, let's say you've been feeling irritable about a situation. (You also can apply the practices below to different aspects of your mind, or to other people or to situations in the world.)

Looking deeper means being interested in what's under the surface. For example, what previous situations does it remind you of — particularly ones when you were young and most affected by things?

Looking wider means broadening your view:
Looking again means being active in your investigating. You keep unraveling the knot of whatever you're curious about, teasing apart the threads, opening them up and seeing what's what. You don't take the first explanation as the final one. There's an underlying attitude of wonder and fearlessness. Like a child, a cat, a scientist, a saint, or a poet, you see the world anew.

For your journaling today, here's an exercise for cultivating curiosity. Set a timer for 10 minutes. When the timer starts, start writing. Keep the pen moving without stopping to think until the 10 minutes are up. Here's the twist: Write nothing but questions. Write questions about what happened to you, what you saw, heard, experienced, felt in the last 24 hours. Don't answer any question. Just move immediately on to asking the next question.


* * *
For list of all weekly practices: "Practices of the Week Index"
Posted by Rev. Meredith Garmon at 15:29