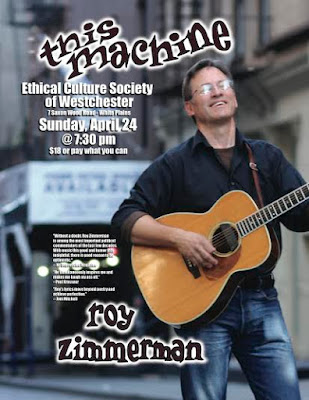 Our special musical guest is the songster satirist, Roy Zimmerman.

Later Sunday evening, Roy's giving a concert at the Ethical Culture Society at 7:30.

There's a decidedly Lefty slant to his lyrics. "We used to have a name for Right Wing satire," he says. "We called it 'cruelty.'"

Tom Lehrer himself says, "I congratulate Roy Zimmerman on reintroducing literacy to comedy songs. And the rhymes actually rhyme, they don't just 'rhyne.'"

In twelve albums over twenty years and on stages, screens and airwaves across America, Roy has brought the sting of satire to the struggle for Peace and Social Justice. His songs have been heard on HBO and Showtime. He has recorded for Warner/Reprise Records. He's a featured blogger for the Huffington Post. And everywhere Zimmerman goes, the Starving Ear goes with him. (Read more at: royzimmerman.com)

Here are a few samples of Roy's work:


"Everybody Is Everybody Else"


"I Approve this Message"


"Hope, Struggle, and Change" (cover by Phoenix Choir of UU Congregation of Atlanta)