Let Your Precious Go
Practice of the Week 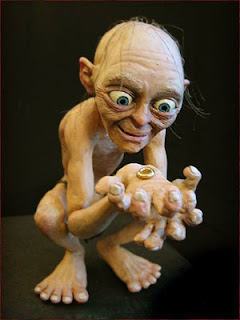 Here's an article by Gretchen Rubin, "Do You Have Something Precious that Isn’t Good for You?":


I’ve been re-re-re-re-re-re-reading J.R.R. Tolkien’s The Lord of the Rings books. In case you’re not quite as familiar with the story as I am, one of the book’s main characters is Gollum, who for many years carried the One Ring, an evil ring of supreme power. The ring extended Gollum’s life but turned him into a pitiful creature. In The Hobbit, Gollum loses the ring, which is found by the hobbit Bilbo, who later gives it to Frodo.

Whenever Gollum refers to the ring, he calls it “my precious.” “Losst it is, my precious, lost, lost! Curse us and crush us, my precious is lost!” And when the wizard Gandalf goes to research the history of the ring, he finds an account by King Isildur, who, in the distant past, had won the ring from the evil Sauron. Isildur writes of the ring, which he refuses to destroy, “It is precious to me, though I buy it with great pain.” So again, that word “precious.”

Once the ring comes into the various people’s possession, they hate to give it up. They become enslaved to the ring, though it’s precious to them. I’m haunted by the way, through the books, Gollum mourns for “my precious.”

I’ve noticed that many people have a habit that makes them unhappy — one that they know drains them, isn’t good for them, causes them grief. And yet, at the thought of giving it up, they protest, “No! It’s my precioussssssss!”

A friend told me that she was uncomfortable about how much wine she was drinking every night, but when I said, “Do you think you’d like to stop drinking the wine?” she became very agitated, saying “No, no! I don’t want to do that.”

Or when another friend told me that she felt bad about her weight, and I said that I felt so much better after I gave up sugar, she said, “Oh, that’s ridiculous. I could never give up sugar.”

And I talked to a friend from law school who felt lousy because he was exhausted all the time; when he told me that he gets four hours of sleep each night, I said, “Maybe you could go to bed earlier?” In a furious voice, he said, “If I went to bed earlier, that would mean my firm would get more of me! That time at night is the only time I have to myself!”

Each time, I was reminded of Gollum and Isildur. “It’s my preciousssss! It’s precious to me, though I buy it with great pain.”

We’re grown-ups. We can do what we want. I’m not saying that giving up wine, or sugar, or leisure time is necessarily the right thing for those folks to do. But as my Habits Manifesto holds, “We should make sure the things we do to feel better don’t make us feel worse.”

It’s precious...but perhaps we’d be healthier, happier, and more productive if we think about tossing it away. Whenever I start to get that feeling in my life, when I feel myself starting to hiss, “But it’s my precioussssss!” I pay attention. Am I being mastered by something that’s not good for me?

For a while, I had this feeling about — of all things — Greek yogurt. Oh, how I love Greek yogurt! I was eating it two or three times a day, instead of other foods. Which I knew wasn’t a healthy course for me. And if some other member of my family ate the last carton of yogurt, I was furious. So I stopped eating it altogether for a while (that’s the Abstainer way). Now I eat it just once a day, and am finding that manageable. But for a while there, I had that feeling of “this isn’t good for me/but it’s precious to me/so I’m going to refuse to give it up.”

1. After reading the above article, identify something that you treat as your “precious.”

2. Give it up. Or make some small step in letting it go. Liberate yourself from your “precious."

Write about what you gave up and what it was like to let it go, or take a step toward letting it go. Was easy? Hard? Did it feel liberating immediately? Did it cause anxiety?

* * *
For list of all weekly practices: "Practices of the Week Index"
Posted by Rev. Meredith Garmon at 19:08

Email ThisBlogThis!Share to TwitterShare to FacebookShare to Pinterest
Labels: Practice of the Week