From the Minister, Thu Jun 28

Last week, I was at the 2018 General Assembly of the Unitarian Universalist Association in Kansas City.

GA is always exciting and always teaches me something. My first GA was 20 years ago: 1998 in Rochester, NY. In the years since then, I missed a few, though not many. Kansas City was my 18th GA. It was also my first GA serving on the Commission on Social Witness (CSW), to which I was elected at the end of the 2017 GA. Originally named the "Commission on General Resolutions," the CSW shepherds the processes for the social action resolutions that are voted on by all the delegates at GA. This includes shepherding:
In the coming weeks, I'll use this column to write about the CSAI that was chosen at GA 2018. But, first, let's look at the AIWs that were selected. I'll discuss each of the three in the weeks ahead. First, "End Family Separation and Detention of Asylum Seekers and Abolish ICE."

The 578-word statement references our 2013 Statement of Conscience on immigration (read this SOC HERE), and notes that families are being separated, "children are abused and drugged," and that "white supremacy criminalizes black and brown bodies and the exercise of their rights." The statement calls on UUs to demand reunification of families, an end to incarceration of asylum seekers, investigation of the drugging and abuse of detained children, and abolition of ICE and removal of immigration oversight from the Department of Homeland Security.

The statement also urges us to participate in the Jun 30 Mass Mobilization (see HERE) and Jul 2 events at border areas, support immigration reform, and "build accountable relationships with immigrant-led groups, supporting what they request, without usurping leadership." 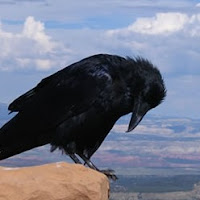 Your Moment of Zen: Delineation. Porcupine came over with a gift of leavings. "Kind of you," said Raven. "I have a report," said Porcupine. "This morning when the birds woke me up, I realized that my quills and my skin don't delineate me." "What delineates you?" asked Raven. "You always blink when you ask a hard question," said Porcupine. Raven said, "You are very observant." READ MORE
Zen at CUUC: Sat Jun 30
Posted by Rev. Meredith Garmon at 19:13