From the Minister, Fri Jun 1

Yency Contreras will be visiting with us at the service on Sun Jun 3. Let me tell you about him. Born in Natapa, Honduras, a hamlet without electricity or running water, in Feb 1987, the eldest of 6 children, Yency slipped out of his family's dwellings in the predawn darkness one morning a couple months after his 17th birthday. He couldn't bear the good-byes with his mother, so he left before she awoke. He made his way up through Guatemala and Mexico on the "train of death" -- clinging to the outside for hour after long hour, struggling to stay awake. Many others have lost legs -- or life -- when sleepiness loosened their grip and they fell from the train. Along the way he was robbed of the small nest-egg of cash he'd brought. Yet he made it to the US border.The 2009 Documentary film, "Which Way Home" chronicles the trip of young people from Honduras coming north on the top and sides of trains through Guatemala and Mexico. That's just what Yency experienced. See: http://whichwayhome.net/ and http://www.imdb.com/title/tt0489342/.

Cousins in North Carolina wired him some money, and he got across to Tucson with the help of a coyote (not a "wolflike wild dog native to North America," but rather "A person who smuggles Latin Americans across the US border, typically for a high fee") who had also promised to transport him to North Carolina. Just outside Lubbock, TX, the car broke down. The coyote told his passengers to wait while he went to get mechanical help. He didn't return.

Three days later, Border Patrol picked up Yency, wandering in the desert a few miles from the car, very hungry and severely dehydrated. He was shipped back to a detention facility in El Paso. That was in April 2004. (The detention facility was one owned and operated by an organization called "Southwest Key." In the documentary, "Which Way Home," the main character is also captured after getting to the US and held in a Southwest Key facility. The one in the film "Which Way Home", in Houston, looks just like the one in El Paso that Yency was held in. While Southwest Key is a nonprofit, Yency experienced it as prison.)

In El Paso, the Mexican kids are just sent back over the bridge to Juarez. Hondurans take a bit longer to process. And Yency had a legitimate claim to assylum: he was a minor who suffered domestic abuse at home.

In July 2004, the detention facility put out word they were looking for local clergy to come in and lead Spanish-speaking worship with the detainees during the week. LoraKim, fluent in Spanish, volunteered, and for four Thursdays that July, took her guitar and bass and led music and worship there. My Spanish is feeble, but I went along with her to two or three of those services to participate by miming what she'd told me to mime. That's where Yency met LoraKim and me.

He asked if we could "sponsor" him. We didn't know what this meant, but we made a few calls to find out. When the detention facility got wind of our inquiries, they called us to say we couldn't come back to lead anymore worship services.

But the wheels had begun to turn, and, in October 2004 -- the day after my ordination as a UU minister -- Yency was released into our custody. We half-thought that, once out, he'd make a bolt for it. He didn't. The three of us made our court date in December 2004, where LoraKim and I were made Yency's "managing conservators" -- a status with all the rights of parenthood for as long as Yency is a minor, and in the US, and his natural parents aren't.

We wouldn't have had a clue how to negotiate the bewildering array of required forms to fill out and documents to submit, or how to find a helpful and competent pro bono attorney for an undocumented minor, without the help of a wonderful organization called "Las Americas" in El Pasos. (They could use your support, if you're looking for a good organization that helps immigrants. See: http://www.las-americas.org/.)

Yency turned 18 a couple months later, and has stayed with us. He took seriously his intensive-ESL classes at El Paso Community College, and quickly his English was quite good. Yency is devoutly pentecostal Christian, which certainly lent to our home life together a certain je ne sais quoi. The El Paso Times ran a story about us in 2005: HERE.

In summer 2006, Yency moved with us to Gainesville, Florida. Along the way, he got all his papers through the process, became a legal permanent resident, and got a passport. He worked for four years at the Publix grocery store. He tried six times to pass the math part of the GED -- and finally did in 2010 February. He immediately enrolled in Santa Fe Community College in Gainesville. On 2011 Sep 13, Yency was sworn in as a US citizen. After Community College, Yency enrolled in the University of Central Florida in Orlando -- from which he received a Bachelor's in Criminal Justice in 2013.

He moved to Charlotte, North Carolina, went to Police Academy there, and has been on the Charlotte police force ever since. We're very proud!

On Sunday, Yency will be sharing some of his story as we reflect together on the immigration issue. 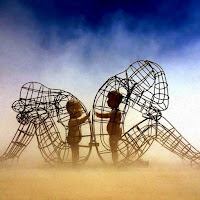 Practice of the Week. Love Your Inner Child. If you are embarrassed, ashamed, critical, controlling, squelching, pushy, or angry about this child, that will affect how you feel and how you act. Therefore, accepting the child parts within you, guiding them gently, and soaking your inner kid in cherishing nurturance will heal and feed the deepest layers of your psyche. READ MORE 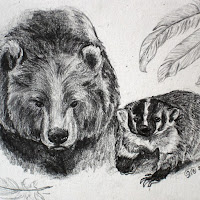 On the Journey, Jun: Justice. HERE
Posted by Rev. Meredith Garmon at 09:53