Practice of the Week
Confront Your Negative Inner Voice

Category: Slogans to live by. Practices for everyone to keep in mind and pay attention to. These practices don't require setting aside a separate substantial chunk of time. Just have the intention to grow stronger in each of these areas as you go about your day, and sometimes make one of them the focus of your daily journaling. The titles of these practices are guiding slogans to live by. 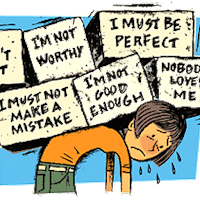 When I was in my early teen years, I barely spoke. People considered me to be painfully shy. However, the real reason I didn't talk was because I was a slave to someone known as Bertha. Bertha would scream at me whenever I attempted to make friends with anyone. In a voice full of alarm and panic, she would yell, "You better NOT do that -- you'll look stupid!" When I heard her, I would immediately back off and lose my opportunity to make a friend. The fact that Bertha was only a voice inside my own head didn't make her any less scary. She was completely in control -- until I came upon a method that got her off my back and out of my head. Once her attempts to scare me no longer worked, my life radically changed.

You may have your own particular form of "Bertha." It may be a voice in your head that tells you you're not good enough, or smart enough, or that you'll always be a loser. Like an out-of-control cancer, destructive thoughts can ruin a person's life if they're not confronted.

STEP ONE: Clearly identify the harmful voices in your head. While we all have critical thoughts from time to time, most people have one or two thought patterns that are particularly destructive and limiting. What are yours? (See the Practice of the Week: "Assess the Strength of Your Inner Critic")

Here are ten thought patterns that often give people problems:
Once you recognize a specific destructive thought pattern from your own life or the above list, it's helpful to give it a name. With apologies to all women named Bertha, that was the name I chose to represent my negative inner voice. "Bertha" represented to me an imposing, mean, nasty-tempered authoritarian. When that voice in my head said, "You better not do that -- you'll look stupid!" identifying the voice as "Bertha" helped me create some distance. With the voice named, it didn't seem so ominous. It was no longer me saying I needed to behave a certain way -- it was mean and nasty Bertha. What name could you give to a specific voice in your head? Any name will do. The important thing is that you know precisely the thought pattern to which the name corresponds. Once you've identified a specific voice and given it a name that fits, you're ready for the confrontation.

Negative inner voices affect our lives only when we take them seriously. Harmful voices feed off our reaction to them. If we can laugh at them or even ignore them, they soon wither and die. They have no power other than the energy we give them. Once a negative inner voice has been identified and named, we're ready for step two.

STEP TWO: Practice ways of distancing yourself from the negative, harmful voice. There are two ways to do this:

(A.) Have a dialog with the negative inner voice. When you do this, imagine that your "Bertha" (or "Sam" or whatever name you've picked) has been assigned the job of annoying and controlling you. Your job, on the other hand, is to avoid taking its ranting seriously. Talk to the voice -- silently, or even out loud. Say things like:


Your dialog with your negative inner voice should be whatever works for you. In general, the more your "Bertha" realizes you are hip to its ways, the more it will leave you alone.

(B.) Change the tone of voice in which she speaks to you. Most people hear their negative inner voice speaking in a mean, scary, or urgent tone. Much of the impact of these harmful thoughts comes not just from what they say, but how they sound. Fortunately, you can easily change the tone of the voice to sound ridiculous. Next time you hear your particular brand of Bertha, try repeating the words in Mickey Mouse voice. Or try Daffy Duck or Bugs Bunny -- whatever voice works for you to make your negative inner voice sound silly. No matter what you think, it's hard to take it seriously if it's in a Bugs Bunny voice.

As you talk back to your Bertha, or change her tone of voice to sound funny, you'll no longer find her to be so scary or bothersome. Sticks and stones may break your bones, but passing thoughts need not hurt you if you don't take them seriously. The bothersome thoughts of a negative inner voice are a great burden, and it feels wonderful to have that burden lifted. You'll be free to act in ways that you previously avoided, and you'll be able to create new outcomes in your life. Confronting your negative inner voice -- getting it out of your head and off your back -- can help you soar to new heights.

At first, you may not be able to confront your negative inner voice "on the spot" and in the moment when the voice arises. So practice with your journal. At the end of the day -- or the beginning of the next one -- address your negative inner voice in your journal. Write it a letter. Address your voice by name (whatever name you've given it), tell it what its usual patterns are, and why you're not going to let it be in charge any more.

* * *
For list of all weekly practices: "Practices of the Week Index"