I became aware of Judith Shklar's definition of a liberal when I was in graduate school -- and it made an impression that has stayed with me ever since.

Shklar, a philosopher and Harvard professor of Government, said that a liberal is someone for whom cruelty is the worst thing we do. Shklar's actual words were:

"Liberal and humane people, of whom there are many among us, would, if they were asked to rank the vices, put cruelty first. Intuitively they would choose cruelty as the worst thing we do." (Ordinary Vices, 1984)

Richard Rorty (my philosophical hero, mentor, and director of my dissertation) cited Shklar and expressed her point more succinctly:

"We liberals are the people who think that cruelty is the worst thing we do." (Contingency, Irony, and Solidarity, 1989)

Whether liberals are actually less cruel than conservatives is an open question, but liberals are more horrified by cruelty, whether they detect it in themselves or in others. This aversion, we liberals hope, will tend, usually, to make us less cruel -- but we know it's no guarantee.

What, then, does an illiberal temperament regard as the worst characteristic a person can have? The answer, I think, is: weakness. Political rhetoric -- especially lately -- is rife with the implicit assumption if not the explicit declaration that weakness is the worst thing. Hence, candidates claim, over and over, to be fighters. Fighting makes them seem strong, and strong is appealing independent of whether they are strongly pushing for terrible policies or good ones.

It's popular to regard fighting as a virtue. There are times when it may be necessary -- and the wisdom to discern those times and the courage to rise to the necessity of a fight are, indeed, virtues. But being a fighter in general is more often a vice than a virtue. So I was very happy to learn that at least one member of Congress actually took a different view. I happened to come across an article about Alaska representative Mary Peltola visiting a high school. She said to the students:

“You aren’t going to get 434 people to agree with you if they all hate you. So for the people who say, ‘I’m going to go and be a fighter,’ that only gets you so far. You have to go and be a get-a-long-er too, you know, and make friends. The only way you can get things done is if you have a good relationship with the people that you work with.”

It would be nice if more of our leaders were more focused on reducing the cruelty of the systems they oversee. If they would be less interested in fighting, that would be a good start. Thank you, Rep. Peltola.

It’s time again for our Ecospiritual practice for this month – brought to you by Community UU’s Environmental Practices Social Justice Team. Transformation.

Transformation is life, and death and decay are integral to life. The leaves that fall in autumn provide nutrients for the green shoots that emerge in the spring. Predator devours prey. Thousands of neurons in a newborn's brain die in order for others to form connections. Without these cell deaths, the child's development would be impaired. Sometimes death may feel untimely: the fox finds the mother rabbit's burrow. The baby zebra ends up in the lion's mouth. The eggs grow cold from exposure and never hatch.

The evolution of new forms of life requires extinctions of other forms. Life flows onward, and death flows onward, cleansing, clearing, and recycling the raw materials of life.

Life and death are really one process – a process of continual transformation. We—and everything else that exists—are always in the process of being, becoming, dissolving, evolving, transforming. Our lives ripple over the ocean until we peter out or run aground, but we are never separated from the larger whole.

Second, imagine Your Own Funeral. Finally, over the next several months journal your observations of the life cycle of a plant, from seed to seed.

For the details on these, as well as group activities for your Ecospiritual group, see the full post: "Transformation." 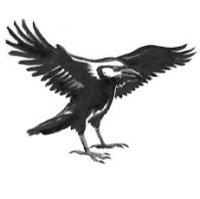 The only other time we've seen Mockingbird was in #76 when he asked about gossip. Today he seems to have a question that cuts directly to the heart of the matter: Who am I? Who are you?

We are what we do: our routine and everyday characteristic doings, as well as our tumblings. What we do is always enactment of relationship. But tell me: when Raven holds out her wings and Mockingbird holds out his, who is doing so with greater freedom? Maybe it's not the one you think.

One fine day Mockingbird met Raven on the Assembly Oak and asked, "Who is Raven Roshi?"
Raven held out her wings.
Mockingbird held out his wings.
Raven croaked.
Mockingbird croaked.
Raven abruptly pecked at his claw, and he tumbled from the tree.

Teachers have pecked us off balance.
Remember how we tumbled from our perch?
Do you remember: Was it just what we needed?
Did we croak, stretch our wings, fly?
Or plummet to the injuring ground?
It was the death of our freedom,
And its birth.