Practice of the Week
Pause
Adapted from Rick Hanson, Just One Thing 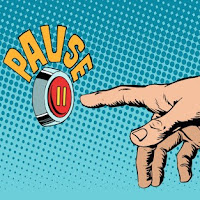 Doing therapy with a child who's learning better self-control, sometimes I'll ask if he or she would like to ride a bike with no brakes. The answer — even from the most spirited ones — is always no. They understand that no brakes mean either a boring ride or a crash; paradoxically, brakes let you go fast and have the most fun.

It's the same in life. Whether you're faced with criticism at work, a partner whose feelings are hurt, an internal urge to lash out verbally, or an opportunity for some gratification that will cost you later, you've got to be able to put on the brakes for a moment — to pause. Otherwise, you'll likely crash, one way or another.

Your brain works through a combination of excitation and inhibition: gas pedals and brakes. Only about 10 percent of its neurons are inhibitory, but without their vital influence, it's your brain that would crash. For example, individual neurons that are over-stimulated will die, and seizures involve runaway loops of excitation.

In daily life, pausing provides you with the gift of time. Time to let other people have their say without feeling interrupted. Time for you to find out what's really going on, calm down and get centered, sort out your priorities, and craft a good response. Time both to bring cool reason to hot feelings, and to enable wholeheartedness to soften hard-edged positions. Time for the "better angels of your nature" to take flight in your mind.

Let yourself not act. Sometimes we get so caught up in neverending doing that it becomes a habit. Make it okay with yourself to simply be from time to time.

A few times a day, stop for a few seconds and tune in to what's going on for you, especially beneath the surface. Use this pause to make space for your experience, like airing out a long-closed closet into a big room. Catch up with yourself.

Before beginning a routine activity, take a moment to become fully present. Try this with meals, starting the car, brushing your teeth, taking a shower, or answering the phone.

After someone finishes speaking to you, take a little longer than usual before you reply. Let the weight of the other person's words — and more importantly, the person's underlying wants and feelings — really sink in. Notice how this pause affects you — and affects the other person's response to you.

If an interaction is delicate or heated, slow it down. You can do this on your own even if the other person keeps rat-a-tat-tatting away. Without being deliberately annoying, you could allow a few seconds more silence (or even longer) before you respond, or speak in a more measured way.

If need be, pause the interaction altogether by suggesting you talk later, calling time out, or (last resort) telling the other person you're done for now and hanging up the phone. In most relationships, you do not need the permission of the other person to end an interaction! Of course, pausing a conversation (which may have become an argument) midstream is more likely to go well if you also propose another, realistic time to resume.

Before doing something that could be problematic — like getting high, putting a big purchase on a credit card, firing off an irritated e-mail, or talking about person A to person B — stop and forecast the consequences. Try to imagine them in living color: the good, the bad, and the ugly. Then make your choice.

Last, for a minute or more each day, pause globally. Just sit, as a body relaxed and breathing. Letting thoughts and feelings come and go as they will, not chasing after them. Nowhere you need to go, nothing you need to do, no one you need to be. Paused from doing, sinking into being.

* * *
For list of all weekly practices: "Spiritual Practice Directory"
Posted by Rev. Meredith Garmon at 22:07

Email ThisBlogThis!Share to TwitterShare to FacebookShare to Pinterest
Labels: Hanson, Practice of the Week