Practice of the Week
Be Mindful
Category: Supporting Practices: observances that support and expand developing spirituality.

"When we are mindful, deeply in touch with the present moment, our understanding of what is going on deepens, and we begin to be filled with acceptance, joy, peace, and love." (Thich Nhat Hanh)

Text below adapted from Rick Hanson, Just One Thing.
The movements of information through your nervous system -- which is what I mean by "mental activity," most of which is unconscious -- can create lasting changes in brain structure:

In particular, this rewiring is accelerated for what's in the field of focused attention. In effect, attention is like a combination spotlight and vacuum cleaner: it illuminates what it rests upon and then sucks it into your brain.

Since attention is largely under volitional control -- you can direct it with conscious effort -- you have an extraordinary tool at your disposal all day long to gradually sculpt your brain in positive ways. Unfortunately, most people do not have very good control of their attention: it's hard for them to rest it where they want and keep it there -- such as an important but boring meeting, or the sensations of one breath after another -- and hard to pull it away from things that aren't helpful, like senseless worry, self-critical rumination, or too much TV. The reasons include temperament (for example, anxious, spirited), personal history (for example, losses or traumas that keep them on edge), and our hyper-stimulating, ADD-ish culture. 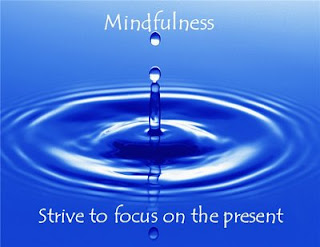 Happily, attention is very trainable. You really can develop better control of your spotlight/vacuum cleaner. This is where mindfulness comes in—which simply means being steadily aware of something. As you practice being mindful, you will gain more control over your attention.

You could be mindful of what's around you -- perhaps key details at work, the deeper wants of your partner, flowers blooming and children smiling, or where you left the car keys. You could also be mindful of your inner world, such as soft feelings of hurt underneath brittle anger, your good intentions and basic decency, or unrealistic expectations that set you up for disappointment.

Mindfulness has lots of benefits. It brings important information about what's happening around you and inside you. It helps you witness your experience without being swept away by it, and to hold it in a larger context; as your mindful awareness increases, negative experiences have less impact on you. And the duration and intensity of what you are paying attention to tends to increase its traces in your brain. Consequently, mindfulness really helps you take in positive experiences.

To some extent, mindfulness has become associated with Buddhism, but all the world's religions and moral traditions value being mindful -- rather than mindless! Additionally, mindfulness is increasingly taught in secular settings such as hospitals, corporations, classrooms, professional sports, and military training.

Studies have shown that regular practices of mindfulness:
Pretty great for a simple method—mindfulness—that you can use, privately and effectively, anywhere you go.


How
Mindfulness is natural. You are already mindful of many things each day. The problem is that most of us remain mindful for only a few seconds at a time. The trick is to have more "episodes" of mindfulness, and to lengthen and deepen them.

So, set aside a minute or more every day to be deliberately mindful -- focusing on a specific object of attention (e.g., the sensations of breathing) or opening wide to whatever moves through awareness. You could extend these moments of mindfulness into a longer period of meditation, letting your mind become increasingly clear and peaceful.

Then, throughout the day, add some additional times of mindfulness when you remain stably present with whatever is happening around you and inside you. If you like, use recurring events such as meals, a telephone ringing, or walking through a doorway as reminders to be mindful.

It will support and deepen your mindfulness to bring an attitude of curiosity, openness, non-judgmental acceptance, and even a kind of friendliness to the things you're aware of. Also try to develop a background awareness of how mindful you are being; in effect, you are paying attention...to attention, in order to get better at it.

These practices will gradually train your brain to be more mindful, which will bring you many rewards. For as William James -- the first major American psychologist -- wrote over a century ago (1890, p. 424):


"The faculty of voluntarily bringing back a wandering attention, over and over again, is the very root of judgment, character, and will...An education which should improve this faculty would be the education par excellence."