Sources from the Buddha to contemporary brain neuroscience to psychology's Dialogical Self Theory say (or are often cited as saying) that there is no self.

What does not exist -- these schools of thought and many others would agree -- is a discrete (apart, detached from others, separate) and permanent Self. There are two points here:

(1). The Self isn't permanent. You are constantly changing. You aren't the being that you once were. "You can't step twice in the same river," as Heraclitus said. This is so not only because the river is continually changing, losing its waters into the ocean and gaining new waters from tributaries, but also because you are changing in the same way the river is.

(2). The Self isn't discrete. The line between self and not-self is fuzzy, porous, and constantly shifting. What typically feels most like one's self is the part of you over which you have voluntary, conscious control over. But this can get fuzzy. Did you voluntarily choose what foods would be your favorite, or who you fell in love with, or what movies made you cry? At most, we might say "kinda." But if you examine your experience I think you'll notice that food preferences, romantic attraction, and cinema emotions mostly, if not entirely, "just happen" to you. Lying in bed at night waiting to fall asleep, thoughts flow through your brain -- but did you ever consciously make a decision about what to think about? Even your thoughts -- most of them, anyway -- "just happen" to you. Even the parts of you that feel like the "core" of your self are composed of and created by non-self factors that you didn't choose. There's no discrete self.

No permanent self. No discrete self. But there's definitely a self. It's rather like a hurricane: constantly changing, without a distinct border, and just barely coherent enough to be given a name.

If we keep in mind that nothing about us is either permanent or distinct, then we'll see that satisfaction in life, likewise, isn't permanent, and isn't so separate from dissatisfaction. This will help us be less attached to the expectation of satisfaction. Life's dissatisfactions are lighter when we don't expect otherwise.

PRACTICE OF THE WEEK: Repetition

From Norman Fischer’s Training in Compassion. Trainings #15-20: Grow the Five Virtues. #16: Repetition. You’ll remember #15 was Determination. The determination to pursue a spiritual path will lead to many repetitions of the practices of that path. Repetition leads to familiarization, and familiarization is key. To get out of an old way of being, get deeply familiar with a new way.

So choose your spiritual practice, and stick to it. Support your path with daily journaling, study, and meditation. Add further supporting practices such as mealtime grace, keeping sabbath, and getting enough sleep. Repeat these practices often – familiarize yourself with them so thoroughly that they become second nature.

When we go to the gym to lift weights or do aerobics, we know that one or two days will do little good. The virtue is in the drill, the repetition over time. This is what changes our body. Likewise, repetition changes the mind. Repetition is the true soul of spirituality. Become as familiar with your inner life – your soul or spirit – as you are with your phone number, address, or place of business.

For more on Repetition, see the full post "Repetition" 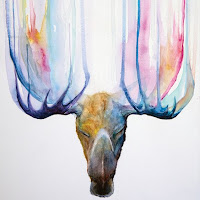 When Raven was just starting on the path, she visited Moose Roshi -- as well as Jackrabbit Roshi and Prairie Dog Roshi -- before settling down under the tutelage of Brown Bear Roshi. In #93, we learned that, "Raccoon was a student of Moose Roshi at Cedarford, but he visited the Tallspruce community occasionally."