Practice of the Week
Martial Arts

Category: Might Be Your Thing (This practice is not for everyone -- but may be just the thing for you!)


“To me, the extraordinary aspect of martial arts lies in its simplicity. The easy way is also the right way, and martial arts is nothing at all special; the closer to the true way of martial arts, the less wastage of expression there is.” ― Bruce Lee 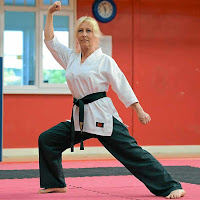 There are small lava rocks in the grass from an earlier wind-storm, in which these rocks were strewn from the roof tops all over the campus walkways and greens. My bare feet do not appreciate them, and as we proceed through our warm-up kicks and sets I occasionally yelp and throw a rock out of the way. Still, by the time we have run through some more complex movements, I am no longer aware of the rocks. I am inside my body, the muscles, tendons, and bones. And I am inside my soul.

I have been practicing martial arts for about six years – three different styles of karate and kung fu for the three different cities I have lived in during this time. I was introduced to the idea while living in Brooklyn, New York, and feeling a bit vulnerable in the big city. I read a book, Women in the Martial Arts, and was amazed to discover that one of the teachers highlighted had a studio not three blocks from my apartment. I arrived the first day expecting to learn a thing or two about self-defense. Little did I know how much I would come to love this art form.

Some people enjoy prayer, meditation, yoga, tai chi – the quiet and calming ways to get centered and touch the holy within and without. While I do enjoy a small dose of such practices, what I have discovered about myself is that I much prefer kicking, screaming, and punching as a spiritual path! The martial arts for me embody the unity of heart, mind, and body. There are slow, spiral movements that look like leaves floating down into a pond; there are sharp, stinging movements that mimic fierce animals; there are powerful, sly balancing acts that require lightness and strength in the same moment. To practice the martial arts, you must use your mind to memorize and to plot strategic movements. You must engage your body, which you come to rely on to be both quick and slow, balanced and strong. And you must touch a place beyond mind and body, what in Chinese is called chi and in Japanese is called ki – the center of your energy, the soul.

Before I walked into the Brooklyn Women's Martial Arts studio, I was really quite disengaged from my own body. Many women who have experienced abuse, rape, or other kinds of physical trauma report that they find it difficult to reconnect to their bodies, in some cases even feeling a sensa-tion of floating around somewhere outside of themselves as they go through the motions of living their daily lives. While my case was not this extreme, owing to a date-rape experience in my teens I had definitely lost the ability to soak in the sunshine, to accept caresses without guard, to walk barefoot on the beach and give myself to the ocean. It was as if a part of myself had decided the best defense was to detach from my own sensuality. If I couldn't really feel my body, no one else could take it from me.

What I found in the rigorous exercise of karate was a doorway back to wholeness. Almost imperceptibly, in the company only of women, I began to heal in a deep, cellular way. As I learned to set my foot just so, bending my knees and pulling in through my abdomen to hold a pose on one leg, or practiced moving through a series of animal- or insect-like movements, I came back inside of myself again. Sometimes, class could be painful, as my muscles protested, the summer heat battered us, or I simply could not get a movement right, even after one hundred repetitions. At other times, class was pure joy, as everything came together in a harmonious flow. As I was learning the basics of punching, standing, breathing, blocking, kicking, and yelling my fierce warrior cry, I was learning the basics of being a human in a body again. I was letting go of baggage that was keeping me from my own growth as a spiritual and physical person.

The Asian martial arts were influenced by the moving meditation practices in medieval Chinese Buddhist monasteries. They were not originally intended to be a martial practice, but were purely to help the monks become more mentally and physically fit. According to legend, the Shaolin monastery suffered a series of raids by brigands. During one of the attacks one of the monks fought off several of the outlaws with an array of hand and foot techniques adapted from the monks' moving meditation. The other monks were so impressed that they asked him to teach them his method. The practice of martial arts grew at the Shaolin temple and eventually made its way across Asia.

What remains a spiritual struggle for me in practicing this art is the fact that it is a fighting method. During my most recent class I learned movements intended to blind, choke, break knees, break ribs, and generally incapacitate my op¬ponent. Some of the movements are intended to flat out kill the opponent. So where does this leave one spiritually? At peace? In the arms of the loving One, embracing the web of life, experiencing the wonder and oneness of all being? Paradoxically, while at times I do feel unsettled by the inherent violence of such techniques, most often I am left with a greater sense of harmony and peace.

I intend no harm with my skills in fighting, but I am will¬ing to use them if necessary for my own defense, and for those who would be harmed unjustly around me. When Jesus said to "love your enemies," I do not believe he meant to teach that love means allowing one person to destroy, dehu¬manize, or hurt another. Perhaps what he was really saying is that the enemy is ourselves, and that we need to embrace and love the wholeness of who we are, both good and bad, in order to be fully human. What I fear most is not the channeling of aggression in responsible ways, but its repression. No one is exempt from anger, and when stifled it too easily becomes expressed as violence, whether self-destructive, or harmful of another.

At this stage in my life, with a full-time career as a minister and a small child to take care of at home, I am not as interested in the sparring aspect of the martial arts as I once was. I'm just not up for broken ribs and noses the way I used to be! My current teacher prefers to focus solely on kata, which are choreographed movements against an imaginary opponent. Many of them appear to be elaborate, flowing dances to the untrained eye. In fact, when the peasants were prohibited from studying the martial arts in China for fear they would empower an uprising, the kata were used to disguise their continued practice. Although we do work with partners, there are virtually no injuries in my current school, which is just fine with me. I am happy that there are choices within the martial arts about the level of intensity with which to engage the practice.

When I remove my street clothes and don my black gi, removing my shoes and tying on my belt, I enter a different time and space. I walk barefoot on holy ground. It is a special time to reconnect with body, mind, and spirit. The connection and energy run from the sky and from the earth, infusing me with vibrancy and life. When I bow out at the end of class, I re-enter the world, calmer, more grounded, and at peace.

Email ThisBlogThis!Share to TwitterShare to FacebookShare to Pinterest
Labels: Alexander, Might Be Your Thing, Practice of the Week