Practice of the Week
Keep Going


"If you're going through hell, keep going."
- Winston Churchill


Adapted from Rick Hanson, Just One Thing. [Order a copy for yourself: HERE]: 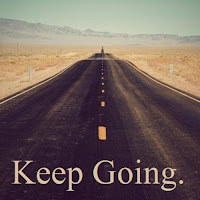 I once attended a workshop led by Joseph Goldstein, a Buddhist teacher. I had realized something about the lack of a fixed self, and shared the insight with him. He nodded and said, "Yes, right." I felt seen for taking a step forward. Then he smiled and added something I've never forgotten: "Keep going."

Of all the factors that lead to happiness and success -- such as class origins, intelligence, personality, character, looks, luck, race -- the one that typically makes the most difference over time is persistence. Knocked down ten times, you get up ten times.

If you keep going, you might not reach your goal -- but if you stop, you certainly won't reach it.
We respect people who persist. There's a magic in determination that draws others toward it and elicits their support.

And you just don't know when your day will finally come. There are so many stories of "overnight success" that actually arrived after many years of effort, often including some failures. For example, Dwight Eisenhower was an obscure colonel in 1939 -- and nearly forty-nine years old -- when Germany invaded Poland to begin World War II. Four years later he was in charge of all Allied forces in Europe; nine years after that he was elected president.

Make sure your goals are worthy of your perseverance. You can be determined to a fault. Don't "keep going" down a tunnel with no cheese. Consider the collateral damage: are you winning battles but losing the "war" of overall health, well-being, integrity, and welfare of others?

Know the feeling of tenacious persistence. It could be fierce, strong, stubborn, unyielding, clear, inspired, surrendered, on-mission, purposeful, focused, committed -- or all of these. Recall a time you had this feeling, and know it again in your body. Call it up whenever you need to draw on resources inside to keep going.

Take the step that's right in front of you -- one after another. I've taught many people to rock climb: Beginners will often have one foot down low and one foot at knee level, on solid placements, plus two good handholds, yet they can't find any new holds, so they feel stuck. But when they simply stand up on the higher foothold -- taking the step that's available -- that brings higher handholds and footholds within reach.

Find the pace you can sustain. Life's a marathon, not a sprint. For example, on my first Boy Scout backpack trip, I was a skinny, nerdy, unathletic kid. But I wanted to be the first to our campsite. We set out and the burly "alpha" boys raced ahead, while I kept up a slow-but-steady pace. After a few miles, I passed them sitting down on the side of the trail. They were startled to see me trucking along and soon got up and raced past me. But after another few miles, once again they were laid out by the side of the trail, this time really fried as 1 walked past them -- and I was very happy to get the first, really cool tent spot.

Keep going in your mind even if you can't make any headway in the world. Maybe you're truly stuck in some situation -- a job, an illness, a certain sort of marriage. But at least you can continue to reflect on what's happening, learn to cope with it better, and love the people around you. And over time maybe things will improve. As Winston Churchill said, "If you're going through hell, keep going."

Have faith that your efforts will pay off. You may have heard this teaching story: A bunch of frogs fell into a vat of cream. They couldn't jump out, and one after another drowned. But one frog refused to quit and kept swimming and staying alive, even after all the other frogs had died. Finally its movements churned the cream to solid butter -- and it hopped out to safety.

1. Use your journal to take some take to review the last 5 or 10 years of your life through the lens of persistence. When have you most exemplified persistence? In what areas would you assess you didn't display as much persistence as you would have liked? Where did you exemplify persistence toward a goal of dubious worthiness?

2. What does persistence feel like? What bodily experience/sensation do you have when you're most exhibiting persistence?
(Writing it down will help you recall the feeling when you need to draw on it.)

3. What goal are you now persistently pursuing. Is that goal really worthy? If so, write about why you think so.


* * *
For list of all weekly practices: "Practices of the Week Index"
Posted by Rev. Meredith Garmon at 19:20