Practice of the Week
Succeed at Rejection

How to Overcome Fear of Rejection

"He says the best way out is always through.
And I agree to that, or in so far
As that I can see no way out but through" (Robert Frost) 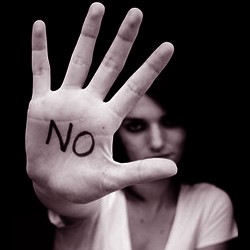 When I was seventeen, I was very shy. It was hard to meet women my own age. By the time I was a freshman in college, I had only been on two dates. I was terrified of being rejected. My fear was like a prison, keeping me locked away in self-imposed loneliness. One day, I vowed I would overcome my fear. I would plow my way through it. I enlisted the help of a good friend to help sustain my motivation to face my fright head on. I gave my friend $50 and told him, "Don't give me this money back unless I get rejected by ten different women by the end of today." I figured experiencing ten rejections would lessen my fear.

I strolled down to the University Center to seek out women. As I approached the first, sweat was dripping from my forehead. My knees were shaking, and as I said, "Hello," my voice cracked. When she turned and saw me shaking and sweating, she worriedly asked, "Are you all right? Do you need me to call an ambulance?" I assured her she didn't to do that, and that I'd soon be OK. A brief, awkward conversation ensued before I mumbled, "Would you like to go out together sometime?" In a kind voice she responded that she had a boyfriend, but that she was flattered that I had asked.

Only nine more to go, I thought as I began to breathe again.

Each rejection got easier. I soon noticed that the women I spoke to seemed more nervous than I was. My rejections were proceeding rapidly and smoothly until the seventh woman I approached. When I asked her for a date, she said, "Sure."

I hadn't thought of that possibility. "Sure, what?" I said.

After she convinced me she was really agreeing to a date, I wrote down her number, and, in a state of happy amazement, soon asked another woman for a date. To my surprise, she also said yes. By this time, I was feeling at ease while I asked women out, and the results were often positive. In fact, I had to start acting like a jerk in order to reach my quota of ten rejections and get my $50 back. After a total of eight acceptances, I finally got my tenth rejection. In one magical hour I had set up my love life for my freshman year and put a big dent in my fear of rejection.

The key to overcoming fear of rejection is to set it up so that getting rejected counts as success. As I faced my fear, I saw that it wasn't so bad. I could survive. Since I was fully prepared for it, rejection didn't seem like a big deal anymore. I noticed that with each rejection, it got easier. In addition, as my fear went away and I became more relaxed, I was often rewarded with an unexpected "yes."

Perhaps there is some area in your life in which the fear of rejection has kept you from moving forward. Maybe you've made success too important. Instead, try rewarding yourself for just making an effort and getting a "no." You'll survive. You'll become less controlled by fears of failure. And you'll probably get some unexpected yeses.

The ability to face rejection is one of the most crucial skills for creating a happy life.

There's a spiritual lesson here. When you structure a situation for yourself in which you count failing as succeeding, you teach yourself that what life is really about is neither failing nor succeeding. It's about showing up. It's about bringing the fullness of who you are to every situation. If judgmental fears are keeping you from fully showing up as your unique self, a spiritual practice of plunging into those fears can lead you out the other side.

* * *
For list of all weekly practices: "Practices of the Week Index"
Posted by Rev. Meredith Garmon at 12:06

Email ThisBlogThis!Share to TwitterShare to FacebookShare to Pinterest
Labels: JRobinson, Practice of the Week