It has been quite a year – the first 51 weeks of it. A pandemic rages and ravages. I said that last year, and for some moments there this year we thought we were through it. Even just a week ago, we thought we would be celebrating Christmas Eve together in person – as well as on Zoom. Omicron had other ideas.

As 2021 nears its close, our politics seems as divided and dysfunctional as ever. 5.4 million people have died worldwide from Covid-19 in the last almost-two years. There is a refugee crisis. Over 80 million people have been forcibly displaced as a result of persecution, conflict, violence, human rights violations or events seriously disturbing public order.

On Wednesday, two days ago, the United Nations’ World Food Program said it was reducing food rations for 8 million people in Yemen. Families on reduced handouts will receive barely half of the daily minimum ration. The cuts will push more people into starvation. In Burma/Myanmar, the genocide against the Rohingya continues.

All that. And yet.

In the midst of these disheartening times, in the midst of winter, we arrive again at the anniversary that we, by convention, celebrate -- of the time when, according to legend, God became flesh and was simultaneously human and divine.

Christmas. There is a power in this annual celebration in the darkest days of the year that we should not ignore. Like the shepherds in the carol of the first Noel, our eyes are cast to the east -- hoping against hope to see the rising of a star, a harbinger of the salvific power of truth.

From around the globe scenes of conflict, strife, and war invade our consciousness. We are all the descendants of the hunter-gatherer tribes that were successful in battle against neighboring tribes, and the victors had more offspring than the defeated, so war-fighting came to be embedded in our DNA. Readiness to violence is not a bug of human nature – it’s a feature. But we know it isn’t the only feature.

The Lovingkindness Sutta (from the Buddhist tradition) says:

“As a mother protects her child, her only child, so with a boundless heart should we cherish all living beings.”

That boundless heart was also necessary for our species survival, is also embedded in our DNA, and is also a feature of our species.

So like those shepherds, we look to the east to see what may be rising. We pray that love will more abundantly become flesh and dwell among us, that compassion will more luxuriantly flourish in human hearts.

We have made some discoveries. The divinity of humankind is the humanity of God. Everyone who serves love is the child of God, and everyone who bears love is the parent of God. This, we celebrate. In the bleakness of winter, we celebrate these discoveries, cloaked as they may be in the garment of legend. God is not greater than life, and life is not less than God.

In this season, in these times, then, let every cradle be visited by the three good monarchs of Faith and Hope and Love. Then Christmas shall be with us always, and every birth shall be the birth of God among humankind, and every child a Christ child, and every song a song of angels.

You can read the text here: "Dickens' Carol".

Training in Compassion #5: Rest in Openness of Mind

Sometimes it's called not knowing. Why would we have to know everything all the time? We don't! There's no need to figure everything out. We can just be alive. We can breathe in and breathe out and let go and just trust our life, trust our body. We can just return right now to ourselves. To our actual concrete presence, in the body, in the breath, in the mind and heart. If we had the confidence that this were possible at any moment, then we would feel much more at ease with our lives and it would be easier and happier to take care of all our complicated problems.

Maybe the easiest way to rest in the openness of mind is also the simplest way: just stop and take a breath. One breath, maybe two or three. You could do this now. Take a breath and return to the openness of mind. Breathing in, breathing out, and in the feeling of the breath noticing whatever is there and letting go of it, easily, gently.

Even if you are bored with yourself, even if you have some disturbing things going on in your life that produce disturbing thoughts and feelings in you, it still is possible in this precise moment to notice breathing, notice the body, notice the feeling of being present in this moment of time. This will relax you. This is what it feels like to rest in the openness of mind.

See the full post: "Rest in Openness of Mind." 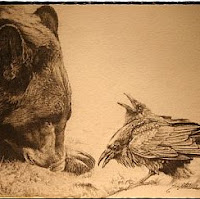 Zen emerged when Buddhism from India spread to China and took on influences from Daoism. (There was no formal merger of institutions of Buddhism and Daoism, thus it is said that Buddhism and Daoism "shacked up," and Zen is their illegitimate love child.) Less recognized is the influence of Chinese Confucianism on the emergence of Zen.