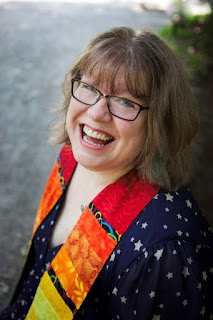 In the last couple of weeks, several people have asked me “why is there nothing about the afterlife in our On the Journey packets this month?” It’s a good question, and the short answer is “the packet can only be twelve pages long” – but the longer answer is that it’s a huge topic, especially for Unitarian Universalists, with our many ideas about what happens when we die, and I wanted to focus our conversations this month about the nature and understandings of what some call God.

That being said, you may still be wondering about what Unitarian Universalists think happens when we die and I’d like to offer some thoughts.

The truth is, while we don’t have just one answer, we do still want closure. We don’t care what the story is, we just want to know. Yet we’re never really going to know until we are dead. If we know anything.

So what are we saying? On UUA.org’s page about memorial service, we say


“Unitarian Universalist views about life after death are informed by both science and spiritual traditions. Many of us live with the assumption that life does not continue after death, and many of us hold it as an open question, wondering if our minds will have any awareness when we are no longer living. Few of us believe in divine judgment after death. It’s in our religious DNA: the Universalist side of our tradition broke with mainstream Christianity by rejecting the idea of eternal damnation.”

Well... okay... I suppose if we’re looking for how UUs view the afterlife, we can, at least in part, look at the beliefs of our Unitarian and Universalist forebears. The Unitarians were Christians who believed in salvation but did not buy that Jesus was God, rather that, to quote William Ellery Channing, “that he was sent by the Father to affect a moral, or spiritual deliverance of mankind; that is, to rescue men from sin and its consequences, and to bring them to a state of everlasting purity and happiness.” And what is that state of everlasting purity and happiness? Channing explains that  “We conceive of heaven as a state where the love of God will be exalted into an unbounded fervor and joy; and we desire, in our pilgrimage here, to drink into the spirit of that better world.”
On the Universalist side, heaven is seen similarly – a place of Glory, as Hosea Ballou would describe it. The biggest difference between early 19th century Unitarians and Universalists was the mechanisms for salvation itself, and the state of one’s soul. For many on the Unitarian side, and even some Universalists, there was punishment, or at least purgatory, after death, where a soul could work out their sin issues before going to that state of everlasting purity and happiness. But for the Death and Glory crowd, heaven was instantaneous – we work out our stuff here on earth, then all souls go to heaven. No punishment, no holding pattern – just... heaven.

Now I should pause here to consider the idea of heaven in this context; for those familiar with the Lord’s prayer as found in the Christian gospels, it says “thy kingdom come, thy will be done on earth as it is in heaven.” A common understanding of heaven is that it is this world, perfected. The unfallen Eden. Paradise. All that we can imagine, all that we imagine that God intended earth – and us – to be, if only we hadn’t exercised our free will.

It’s not a bad image, although it still feels like we’d be subservient to God, the ruler of the kingdom of heaven, and it’s not an image I suspect modern Unitarian Universalists hold.

So let’s consider some other ideas. One I have loved is from CS Lewis, in his book The Great Divorce. In this short allegory, he proposes that when someone dies, they are introduced to heaven as though they are tourists, given a chance to talk to those who have gone before, but mostly to see heaven for what it is – reality, intensified. In Lewis’s imagination, earth is but a pale, ghostly imitation of what is real. His protagonist cuts his feet on the sharp grass, dodges falling leaves as though they are bullets, and is blinded by the intensity of the colors and sounds. In this allegory, heaven is More Real – and takes some getting used to.

I am also fond of the myriad proposals found in David Eagleman’s book Sum: Forty Tales from the Afterlives. In these 40 very short essays, Eagleman proposes scenarios like this:


And those are but a few of the forty perspectives – and they are only forty, out of billions – maybe 7 billion or so? Because I suspect there are about as many perspectives on the afterlife as there are human beings on earth. Maybe more than that, because everyone who has died has had their own perspective too.

The joy of Unitarian Universalism is that we don’t have to have any one idea about this; rather, we can lean into what makes sense for us, what helps us tell the story we have no way of knowing is true or false until we die

So let me share mine – which is just one opinion.

I don’t know what the afterlife is like, really, and I can only guess that it is like that scene in the film Contact – which we’ll be showing on the 18th – where Jodie Foster’s character exits the wormhole to see the universe with all its galaxies and stars and planets and things unimaginable to us, and in her awe and wonder, she says “I had no idea...” That the incredible, indescribable love that awaits us is so overwhelming, even the worst person would find themselves embraced in that utter awe and wonder.

And – if that isn’t true, and it certainly may not be – I still think we see evidence of the afterlife, every single day, amongst each of us. We carry the DNA of our parents, and their parents before them, generation after generation, going back as far as time. WE are their afterlife. And all of our children and children's children, our friends and colleagues, our lovers and companions, our helpers and healers – we are their afterlife too. And when we tell their stories, when we look at their photos, or say that thing they always used to say, or listen to their favorite song, or fill out their name on a form, or see someone who reminds us of them – they are alive. In us.

This is why we do the rituals – wash the body, hold a wake, play the bagpipes, scatter the ashes, cry at the gravesites, gaze at the picture. This is why we build memorials and monuments. This is why we honor the dead
To give them – and us – a sense of the afterlife.

To complete the story.
Posted by Rev. Kimberley Debus at 09:01