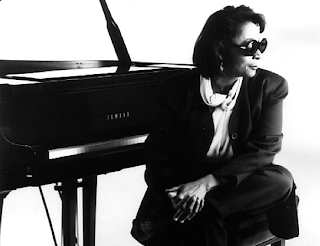 This Sunday, legendary jazz pianist Valerie Capers and bassist/sopranino recorder player John Richardson are our musical guests. Read on for program and biographical information, and please come with your friends to hear Valerie and her trio on Sat Nov 22 at 7pm, at our annual Jazzfest! event.

Prelude:
Some Other Time, from On the Town
Leonard Bernstein

Dr. Valerie Capers was born in the Bronx and received her early schooling at the New York Institute for the Education of the Blind. She went on to obtain both her bachelor's and master's degrees from The Juilliard School of Music. She served on the faculty of the Manhattan School of Music, and from 1987 to 1995 was chair of the Department of Music and Art at Bronx Community College of the City University of New York (CUNY), where she is now professor emerita.

Her outstanding work as an educator has been lauded throughout the country as being both innovative and impressive. Susquehanna University awarded her the honorary degree of Doctor of Fine Arts, and Doane College (Crete, Nebraska) and Bloomfield (New Jersey) College (along with Wynton Marsalis) both have awarded her honorary doctorates. Teaching and workshop venues include Doane College, Stanford University, the Cleveland (Ohio) public school system, St. Thomas (United States Virgin Islands) high schools, Brigham Young University (Provo, Utah) and the Mozarteum conservatory, University of Salzburg, Salzburg, Austria.

Among the awards and commissions she has received are the National Endowment for the Arts, including a special-projects grant to present a jazz series at the Bronx Museum of the Arts, Meet the Composer, the CUNY Research Foundation, the Smithsonian, and The Fund for Artists of Arts International.

Three of Dr. Capers' most noted extended compositions are Sing About Love, the critically acclaimed Christmas cantata produced by George Wein at Carnegie Hall; Sojourner, an operatorio based on the life of Sojourner Truth, performed and staged by the Opera Ebony Company of New York; and Song of the Seasons, a song cycle for voice, piano and cello (which has been recorded several times) was both commissioned by the Smithsonian Institute and premiered in Washington, D.C., at the invitation of the Smithsonian, and recently performed at Weill Recital Hall in New York City.

Dr. Capers has appeared with her trio and ensemble at colleges, universities, jazz festivals, clubs and concert halls throughout the country and internationally, including a series at Weill Recital Hall and at the Rendez-vous de l'Erdre in Nantes, France. Her trio's performances at the International Grande Parade du Jazz Festival in Nice, France, the Martin Luther King Festival in Ottawa, Ontario, and the North Sea Jazz Festival in The Hague received rave reviews. The group has also participated in the Monterey Jazz Festival, the Clifford Brown Jazz Festival (Wilmington, Delaware), Jazz in June (the University of Nebraska-Lincoln), the Mellon Jazz Festival (Philadelphia, Pennsylvania), and New York's Kool, JVC and Downtown jazz festivals.

She is also regularly heard in New York City at The Kitano on Park Avenue South and the Knickerbocker in Greenwich Village. As a classical soloist, she has also performed Mozart's "Concerto for Piano & Orchestra, No. 23" at the Pepperdine University Center for the Arts in Malibu, California.

Throughout her career, Dr. Capers has appeared on numerous radio and television programs, including two appearances on Marian McPartland's Piano Jazz and Branford Marsalis' JazzSet. Adventures of Wagner in Jazz, a special program created by National Public Radio (NPR), and About Music (two separate programs, "Traditions and Personalities in Jazz Piano" and "American Composer and Piano Virtuoso: Louis Moreau Gottschalk") were all broadcast on KBYU-FM in Provo, Utah, and carried throughout the country on NPR.

Throughout her career, she has performed with a roster of outstanding artists, including Dizzy Gillespie, Wynton Marsalis, Ray Brown, Mongo Santamaria, Tito Puente, Slide Hampton, Max Roach, James Moody, Paquito D'Rivera and Jerry Weldon, among others.

Valerie Capers was the first recipient of Essence magazine's "Women of Essence Award for Music," where she was in the elite company of fellow honorees Oprah Winfrey and Marla Gibbs.

Dr. Capers’ recordings include: Portrait of Soul (Atlantic), Affirmation (KMA Arts), Come On Home (Columbia/Sony) Wagner Takes the 'A' Train (Elysium), and Limited Edition (VALCAP Records). Her book of intermediate-level piano pieces, Portraits in Jazz, was published by Oxford University Press (OUP). OUP has also published an arrangement by Dr. Capers of the English carol, "It Came upon the Midnight Clear" (lyrics by the American Unitarian, Rev. Edmund Hamilton Sears) for mixed chorus a cappella.
Posted by Adam Kent at 15:58