Practice of the Week
Don't Throw the Second Dart

“When touched with a feeling of pain, the uninstructed run-of-the-mill person sorrows, grieves, & laments, beats his breast, becomes distraught. So he feels two pains, physical & mental -- just as if they were to shoot a man with a dart and, right afterward, were to shoot him with another one, so that he would feel the pains of two darts.” (Shakyamuni Buddhi, Sallatha Sutta)

Adapted from Rick Hanson, Just One Thing.
Some physical and mental pain is inevitable. I remember being six and slipping on an icy sidewalk in Illinois and landing hard on my tailbone: ouch! Much later, in my fifties, when my mother passed away, there was a different kind of pain. To survive physically, you need a body that tells you it hurts when it's ill or injured. To flourish psychologically and in your relationships, you need a mind that sends different signals of distress—such as loneliness, anger, or fear—if you're rejected, mistreated, or threatened. 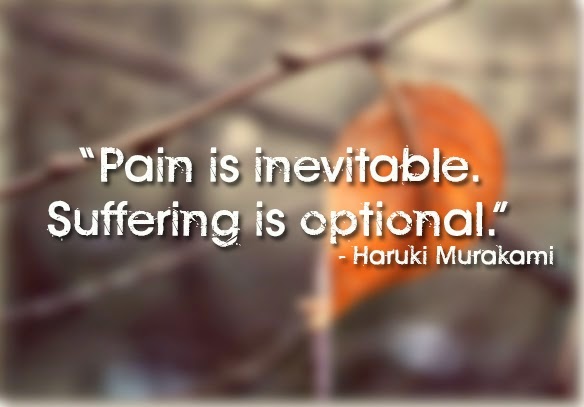 To use a metaphor from the Buddha, the unavoidable pains of life are its "first darts." We don't throw the first dart -- life throws it at us. But then we add insult to injury with our reactions to these darts. For example, you could react to a headache with anxiety that it might mean a brain tumor, or to being rejected in love with harsh self-criticism. We ourselves throw that second dart -- and we don't have to.

Moreover, the "first dart" might not even be a dart at all. It's common to have upsetting reactions when nothing bad has actually happened. For instance, you're flying in an airplane and everything's fine, but you're worried about it crashing. Or you go out on a date and it's fun, but then he/she doesn't call for a day and you feel let down.

Most absurdly, sometimes we react negatively to positive events. Perhaps someone complimented you, and you had feelings of unworthiness; or you've been offered an opportunity at work, and you obsess about whether you can handle it; or someone makes a bid for a deeper friendship, and you worry about being disappointing.

All these reactions are "second darts"—the ones we throw ourselves. They include overreacting to little things, holding grudges, justifying yourself, drowning in guilt after you've learned the lesson, dwelling on things long past, losing perspective, worrying about stuff you can't control, and mentally rehashing conversations.

Second darts vastly outnumber first darts. There you are, on the dartboard of life, bleeding mainly from self-inflicted wounds.

There are enough darts in life without adding your own!


How
Accept the inevitability of first darts. They hurt, but pain is the price of living. Try not to get offended by pain—as if it's an affront—or embarrassed about it, as if it's a personal failing.

When pain does come, hold it in a large space of awareness. In a traditional metaphor, imagine pouring a big spoon of salt into a cup of water and then drinking it: yuck. Next, imagine stirring that spoonful into a big bowl of clean water and drinking a cup: not so bad now. It's the same amount of salt—the same amount of physical or emotional pain—but now held and diluted in a larger context. Be aware of awareness: it's like the sky—pain passes through it like storm clouds, never tainting or harming awareness itself. See if you can let the pain be without reacting to it; this is a key aspect of an unconditional inner peace.

Observe second darts. They're often easier to see when others toss these darts at themselves—and then consider how you throw them at yourself. Gradually bring your recognition of second darts into the present moment, so you can see the inclination to throw them arise—and then catch them if possible before you stab yourself one more time.

A second dart will often trigger a cascade of mental reactions, like one boulder rolling down a mountainside setting off others in a chain reaction. To stop the landslide, start by relaxing your body as best you can. This will activate the calming, soothing parasympathetic wing of your nervous system and put the brakes on the fight-or-flight sympathetic wing.

Next, try to see more aspects of the situation that's troubled you, and more of your life these days altogether—especially the parts that are going fine. Because of the negativity bias, the brain narrows down and fixates on what's wrong, so you have to nudge it to widen its view to what's right. The bird's-eye, big picture view also deactivates the midline neural networks that do second-dart ruminating, and stimulates circuits on the side of your brain that can let things be as they are without reacting to them.

Don't put more logs on the fire. Don't look for more reasons to worry, criticize yourself, or feel mistreated. Don't get mad at yourself for getting mad at yourself!

When you throw second darts, you are the person you hurt most. The suffering—mild to severe—in second darts is truly unnecessary. As the saying goes, pain is inevitable, but suffering is optional.


For Journaling
List and describe three "first darts" of pain that came your way in the last week.
Then describe what "second darts" of reactivity you added to the first darts.
How can you stop adding the second darts?

* * *
Rick Hanson on not throwing darts: