Shermer: "The Science of Good and Evil" 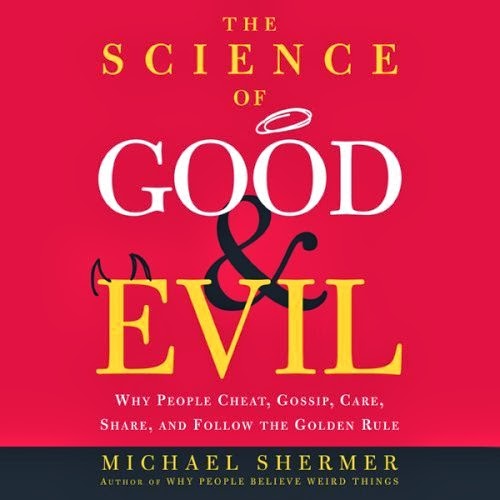 On Thu Jan 23, the group will be concluding its read of:

Michael Shermer, The Science of Good and Evil: Why People Cheat, Gossip, Care, Share, and Follow the Golden Rule (2004).


'From bestselling author Michael Shermer, an investigation of the evolution of morality that is "a paragon of popularized science and philosophy" The Sun (Baltimore)

'A century and a half after Darwin first proposed an "evolutionary ethics," science has begun to tackle the roots of morality. Just as evolutionary biologists study why we are hungry (to motivate us to eat) or why sex is enjoyable (to motivate us to procreate), they are now searching for the very nature of humanity.

'In The Science of Good and Evil, science historian Michael Shermer explores how humans evolved from social primates to moral primates; how and why morality motivates the human animal; and how the foundation of moral principles can be built upon empirical evidence.

Along the way he explains the implications of scientific findings for fate and free will, the existence of pure good and pure evil, and the development of early moral sentiments among the first humans. As he closes the divide between science and morality, Shermer draws on stories from the Yanamamö, infamously known as the "fierce people" of the tropical rain forest, to the Stanford studies on jailers' behavior in prisons. The Science of Good and Evil is ultimately a profound look at the moral animal, belief, and the scientific pursuit of truth.'