Join our Journey Groups in October to discuss PRAYING. This is a term that we often associate with more conservative forms or religiosity -- but I hope we can get over our reactivity. I myself have a wholly naturalistic view of what prayer is. As Christine Robinson and Alicia Hawkins write in our October issue of "On the Journey":

To refuse to consider a possibly helpful concept because it is not scientific is to take an unnecessarily literalist approach to life. After all, most adults enjoy the Santa myth and talk about it with the children in their lives. That myth helps us put words and story to the joy of giving and the excitement of waiting. It doesn't have to be true to be useful. Prayer is similar, an activity that has considerable value and satisfaction, however it works.

It's a helpful practice to pause and orient our hearts in the direction that we want them to be oriented.

The Sep 18 Service, "The Improvisational Self"

Of all the species that have ever lived, 99.9 percent are extinct. There have been five mass extinctions. The first was 444 million years ago. The most recent was 66 million years ago – that’s the one that wiped out the dinosaurs. In each of these, the Earth lost at least 75% of her species. The most devastating, the Permian extinction – the middle one, 251 million years ago -- claimed 96% of all species then extant. The survivors repopulated the Earth, their descendants branching into new and different lifeforms.

That evolution produced primates is a huge fluke. It’s even more improbable that one of them would be an ape about five or six feet tall with armpits, musical instruments, bad jokes, and all the rest that makes us the species we are. We’ve produced written language, painted masterpieces, solved quadratic equations, and built skyscrapers, Kew gardens, and the internet. We ask ourselves the deep questions of philosophy and religion and wrestle with alternative answers. We’ve ventured into space and looked back at our home in awe. We humans are rare and precious. Yet every species emerged from the tangled thicket of evolutionary history going back to the beginnings of life. They too are rare and precious.

Ecospiritual practices for this month include an exercise to honor your uniqueness, an invitation to observe endangered species day, and a journaling prompt for reflection on paths and possibilities.

For the details on these, as well as group activities for your Ecospiritual group, see the full post: "Rare, Precious Fluke." 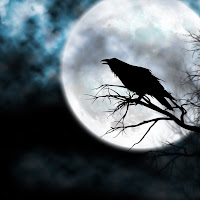 We think and talk in dualisms: good and bad, is and is not, home and away.

These dualisms are necessary. They are also false. The challenge is to use them while also seeing through them.


Owl came to Raven for a private meeting and asked, "Is there something pure and clear underneath everything?"
Raven said, "You can say that."
Owl said, "Isn't it a dualistic idea? I thought Buddhism is a religion of oneness.":
Raven croaked and then said, "Show me your essential purity and clarity."
Owl said, "I was just asking a question about Buddhism."
Raven said, "Don't neglect your religion of oneness."


First comes inferring what must be underneath.
Or believing what somebody else inferred.
And maybe that's enough,
And maybe not. Maybe you want to see it more directly --
Though what "directly" is, or "see," you don't know.

Legends say that once you see it
You'll see it's not underneath,
but immediately presents.
You never were looking at anything else,
Legends say.