The International Day of Democracy was on September 15. The United Nations established the day as a time to acknowledge, celebrate, and advance the cause of inclusive, participatory governance around the world. On this occasion, I wanted to share with you the concern of our UUSC (Unitarian Universalist Service Committee) about the situation in Haiti. The UUSC writes:

The United States often expresses support in the abstract for democracy around the world — but its actions in Haiti have clearly not been consistent with this posture. The Haitian people have already laid out a path to restore democracy and stable governance in the form of the Montana Accord: a platform developed by a broad coalition of Haitian civil society, including UUSC partners. Yet the United States government has been far more of an obstacle to this effort than a friend.

Although the U.S. State Department expresses support for the Montana Accord, they simultaneously back [Prime Minister Ariel] Henry’s specious claim to power. And Henry in turn has torpedoed negotiations intended to implement the Montana principles by refusing to accept limits on his personal authority.

The United States could easily choose a different path. Jacques Ted St Dic, an economist and leader in the Montana Accord effort, lays out three steps the Biden administration could take to support, instead of hindering, the cause of Haitian democracy. These include deploying U.S. influence in the negotiations with Henry to:
1) restore a separation of powers between the three branches of government, in accordance with Haiti’s constitutional order;
2) ensure that Henry engages productively with the Montana framework, under which provisional legislators have already been elected and just need to take office; and
3) help restore the rule of law and end political corruption in Haiti by disrupting organized crime.

The UUSC urges UUs to call on the Biden administration to pursue these goals. To this end, UUSC has partnered with Move On, and asks us to add our names to Move On's campaign, "US Hands Off Haiti's Democracy." Click the link to add your name -- and mark International Day for Democracy by supporting participatory governance in a country where it has been for so long withheld.

It’s time again for our Ecospiritual practice for this month – brought to you by Community UU’s Environmental Practices Social Justice Team. Being Animal.

This understanding of the connectedness of life is recent. Only in the last couple decades have we sequenced genomes to get the details of our interconnection. The implications of our new understanding are profoundly spiritual and offer us new ways to see ourselves as a species.

The deep truth of interconnectedness and interdependence is clear. We are deeply embedded in a grand story, an epic tale beyond any we could imagine -- a small part of which tells of our own waking up to the beauty of the interconnected web of which we are NOT the center. Surely there is spiritual sustenance here: wonder, awe, and common ground to bind us. We have only begun to appreciate the fullness this spirituality offers.

Ecospiritual practices for this month include a shape-shifting visualization exercise and journaling about your own animal nature, emotions, instincts, and desires. For the details on these, as well as group activities for your Ecospiritual group, see the full post: "Being Animal." 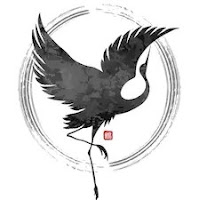 We first saw Reverend Crane in #33, when the Tallspruce Community visited his Little Church in the Grotto. He then came to visit the Tallspruce gang in #107, where he asked what role God has in our practice.

Dogen describes his journey, both spiritual and geographic:


"After the aspiration for enlightenment arose, I began to search for dharma, visiting teachers at various places in our country. Then I met priest Myozen [1184-1225], of the Kennin Monastery, with whom I trained for nine years, and thus I learned a little about the teaching of the Linji School....Later I went to Great Song China, visited masters on both sides of the Zhe River, and heard the teachings of the Five Gates. Finally, I became a student of Zen master [Tiantong] Rujing [1163-1228] of Taibo Peak, and completed my life’s quest of the great matter." (Bendowa)

We have to start where we are -- with the delusions, projections, and imaginings that we have.


Where did you start?
I don't mean, in the womb,
Or the wombs of your two grandmothers,
where your parents waited to be born.
I don't mean the 64 wombs from which your fourth-great-grandparents came,
a couple centuries ago.
I don't mean the first human, first primate, first mammal, first life.
You could pick any of those, say that's where you started,
and have a good point,
But that's not what I mean.
Nor do I mean when you were four, or went to first grade,
Or turned 18.
I mean: where were you when you stepped onto the great way?
Where in your body did the cold lump of defeat weigh?
the smoldering ash of shame,
the cavity of loneliness?
Where was the clench?
stomach? shoulders? throat? chest?
Wherever it was, it reached down to your foot,
and lifted it in the direction of the path.
Wherever it was, that's where you started --
There, and where you are right now.