Practice of the Week
No Schadenfreude, Ever
Category: Slogans to Live By: Carry these reminders at all times. These practices don't require setting aside a separate substantial chunk of time -- but they will slow you down a bit (and that's a good thing.) Resolve to get stronger at living by these slogans, day by day. Sometimes make one of them the focus of your daily journaling. 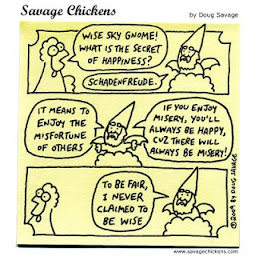 Schadenfreude: “the experience of pleasure, joy, or self-satisfaction that comes from learning of or witnessing the troubles, failures, or humiliation of another.”

We’ve all experienced schadenfreude, and many of us continue to do so regularly. It makes us feel better about our own failures to see others fail. Schadenfreude is relief from feelings of inferiority or envy -- or, if we have reasons for disliking someone, maybe it feels good to see them get a comeuppance. When pastor Tony Perkins, in 2015, said that floods were sent by God to punish abortion and gay marriage -- and then his own house flooded and he had to escape in a canoe – it’s hard not to resist the temptation to a little schadenfreude.

Indeed, there are defenders of schadenfreude, who say, for instance, that it helps us cope with our own misfortunes. This may be true for those without a better coping strategy. Compassion (which includes self-compassion), if the habit of it can become ingrained, works better than schadenfreude.

It takes training to become a person who always gives priority to empathy over schadenfreude. The habit of unremitting compassion requires patient development. We who seek to live lives of compassion are helped along by repeating slogan reminders to ourselves – such as, “No schadenfreude, ever.”

Even if there’s a terrible leader who gets assassinated and this assassination brings in a much better government, don’t dance at his funeral, and don’t rejoice. Suffering is suffering, and it makes emotional sense to always feel compassion for suffering no matter who the sufferer is. Even if we can’t forgive or condone the actions of our enemies, we don’t need to wish misfortunate on them or applaud when bad things befall them.

It is important that those who do harm stop doing that harm. We, or someone, must, when possible, see to it that the harming stops. But this isn’t the same as revenge or enjoying another’s pain. As we have seen, compassion, real compassion, can’t be selective. Though we may not be able to avoid favoring those we love and feeling shaky about those who have hurt us, we are clear that compassion and empathy, if they are going to be of benefit at all, must be universally, not selectively, felt.


Adapted from Judith Lief, "Don’t Seek Others’ Pain as the Limbs of Your Own Happiness."
It is embarrassing to realize how much of our own happiness seems to be based on the suffering of other beings. Even worse, we find that at times we go so far as to hope that someone else suffers, because we know that we will benefit from their pain. We hope that someone else will lose, so that we can win. We develop a kind of dog-eat-dog, or your-pain-my gain mentality.

This slogan is about exploitation. It is about taking advantage of others in order to maintain our wealth and privilege. It could also be applied to our attitude to our mother earth. It is about the habit of take take take, with no gratitude, and with blindness as to the consequences.

When we recognize the extent to which we base our own happiness on the pain of other beings, our so-called happiness is threatened. It begins to ring hollow. So we cover up this reality in a cloud of vague ignorance. We act as though our good fortune is simply our due and has nothing to do with anyone else’s problems or suffering. But often, in fact, the two are inextricably interconnected.

According to this slogan, if our happiness is based on the suffering of others, if that is the only way to maintain it, it cannot be true happiness. Our so-called happiness is both tainted and flimsy. So once again, as in so many other slogans, the habit of putting ourselves first and looking out for number one is shown to be a completely dysfunctional approach. It is a false hope, a phony and a fraud.

Practice. Whether you think of yourself as privileged or as underprivileged, contemplate the effect of buying into the paradigm that increasing your happiness depends on decreasing the happiness of others.