Practice of the Week
Don't Judge

Category: Slogans to Live By: Carry these reminders at all times. These practices don't require setting aside a separate substantial chunk of time -- but they will slow you down a bit (and that's a good thing.) Resolve to get stronger at living by these maxims, day by day. Sometimes make one of them the focus of your daily journaling.


Adapted from Judith Lief, "Don't Talk About Injured Limbs," and
"Don't Ponder Others;" and Norman Fischer, Training in Compassion,
"Don't Talk About Faults," and "Don't Figure Others Out." 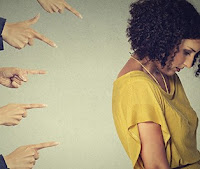 Most of us avoid talking about someone's obvious physical limitations: being wheel-chair bound, on crutches, or missing an arm, say. What about the metaphorical "injured limbs" -- others' limitations of cognitive, emotional, or psychological functioning?


Rather than dwelling on what is wrong with people, which only exaggerates and perpetuates their weaknesses, remember that they are doing the best they can. Accept them as they are.

This slogan does not imply that you should not notice the problems or deformities people have, or that you should pretend everything is okay. The point is to examine how you react to such things.

Judging people distances ourselves from them. It’s a subtle rejection of them. Yet we tend to dwell on faults because we are both fascinated and repulsed by other people’s faults, weaknesses, abnormalities.

Combine awareness with acceptance. Take people as they are, no matter what condition they are in. When you see people in this straightforward way, you are not embarrassed by their ugliness, weakness, or infirmity. Instead, you simply meet them where they are.

Although we all indulge this sort of seemingly innocent judgmentalism, it also makes us nervous. What are the others saying about us when we are not around? Someone who refrained from any complaint about any other person and was consistently supportive and forgiving, would stand out. People would be unusually drawn to such a person.

When someone is being nasty, obnoxious, corrupt, cruel, stupid, or incompetent, speaking of that person's faults in a harsh or critical way doesn't help. It generally makes a bad situation worse. Such criticism makes the person upset, feel attacked, which inspires zir to continue in the same vein.

Everyone who acts or speaks destructively, foolishly, or incompetently is like a person with an injured limb. We don't criticize someone for having an obvious physical injury. Likewise, let us not be critical of the person with an inner injury that is the ultimate cause of zir poor conduct. We can recognize the injury and the limitations that it engenders and respect the person.

Speaking with kindness and warmth to and about a person who has been conditioned by almost all of zir relationships to expect the opposite may cause surprising transformation. Maybe you can’t imagine what the injury would be. But remember: whether you can imagine it or not, there's an injury behind every fault. So condition yourself, little by little, to speak differently. If you need to correct someone, speak with sympathy. Such people need to figure out how to heal their wounds someday, and harsh words will not inspire them, you, or other listeners.

Accept that there is an injury behind every fault. Don't even try to figure out what it is!


It is easy, entertaining, and totally distracting to muse about what is wrong with everybody else. The habit of faultfinding is part of a larger pattern of insecurity in which we always feel the need to compare ourselves to other people. It is as though we need to convince ourselves that we are okay, which we can only do indirectly, in comparison to people who are less okay.

Strangely, when you are not afraid to uncover your own limitations, and you are not constantly comparing yourself to others, it is a great relief. You no longer have to convince yourself of anything and you have nothing to hide. And when you look at other people, you are not doing so with the ulterior motive of using what you see to prop up your own feeling of superiority and virtue.

Norman Fischer: Don't figure others out.


Think of all the time you spend analyzing and discussing acquaintances, as if you could know what was going on with them, as if you had a real line on them and their problems. Who could ever understand another person? We don’t understand ourselves! There is so much going on in our mind -- all sorts of contradictory and underappreciated phenomena – so how could we possibly fathom what makes another person tick?


"We judge ourselves by our intentions; we judge others by the effects of their actions on us."

This is one reason we so often come out on the righteous side of our conflicts: we think we know our own inmost intentions (and we are often wrong); we assume the intentions of others based on our understanding of their outward acts (and we are usually wrong).

Instead, when you find yourself thinking about someone else's motives, needs, or feelings, catch yourself and remember that you don't really know what someone else is thinking or feeling, so you are better off assuming ze is doing zir best and that everyone is on the same human journey you are on. Maybe at the moment zir journey is leading zir down some nasty dark alley ways. Practicing this slogan, repeating it to ourselves frequently, even in the midst of controversy with others, trains the mind to recall that we know little of what is in our own heart, let alone someone else’s.

Yes, there are times when it may be a good idea to try to imagine what someone else is feeling, thinking, needing, or wanting. Doing that in the light of this slogan means doing it with humility, knowing that we may be mistaken.

As you go about your day, with the people you encounter, pay attention to what comes up in your mind. Pay particular attention to the qualities of comparison mind and faultfinding mind. What is the difference between simply seeing a flaw and dwelling on it or using it to prop yourself up?