Last March I read a book by Michael Sandel, The Tyranny of Merit. Drawing on ideas in that book, I preached about the corrosive effect of meritocracy on Sun Mar 20. Those ideas have shifted my own outlook more than any other single sermon-prep I can remember. The anger and discontent of the anti-vaccine, anti-mask folks who believe the 2020 election was stolen makes a lot more sense when seen as a perfectly natural reaction to the humiliation meritocracy heaps on them.

"But the problem isn't only that we fail to live up to the meritocratic principles we proclaim. The ideal itself is flawed. It has a dark side. Meritocracy is corrosive of the common good. It leads to hubris among the winners and humiliation among those who lose out. It encourages the successful to inhale too deeply of their success, to forget the luck and good fortune that helped them on their way. And it leads them to look down on those less fortunate, less credentialed than themselves. This matters for politics. One of the most potent sources of the populous backlash is the sense among many working people that elites look down on them. It's a legitimate complaint."

I happened to be pretty good at going to school, and I enjoyed it. But suppose most of the power in society was held by people who primarily valued something I happened not to be very good at or didn't enjoy? I don't think I'd trust these "elites" either.

Concerning, for example, climate change, we like to say, "I believe in science" -- which sounds like a faith statement -- as if this were the crux of the matter. In fact, the disagreement on climate change among people who score well on grasp of basic scientific concepts is reflective of the overall state of disagreement on climate change. Both sides -- "we" as well as "they" -- use motivated reasoning to reach the conclusions we want to reach. So what determines which conclusion we will want to reach? It has a lot to do with the status our meritocratic system has assigned us.

If we're going to heal from the divisions tearing us apart -- if we're going to find a way to trust each other, and to trust our leaders -- we're going to need a way for all people to believe in the dignity of their own work -- whatever their education level -- recognizing that a key source of dignity is the sense that one's work meaningfully contributes to our national life. We need contributive justice as much as we need distributive justice. As Sandel said:

"We should renew the dignity of work and place it at the center of our politics. We should remember that work is not only about making a living, it's also about contributing to the common good and winning recognition for doing so. Robert F. Kennedy put it well half a century ago. Fellowship, community, shared patriotism. These essential values do not come from just buying and consuming goods together. They come from dignified employment, at decent pay. The kind of employment that enables us to say, 'I helped to build this country. I am a participant in its great public ventures.' This civic sentiment is largely missing from our public life today."

As I say in one of the benedictions I use, using words by Rev. Wayne Arnason, "May a path be found -- and the courage to take it, step by step."

From Norman Fischer’s Training in Compassion, training number 21 is: Unstick from Yourself.

Spiritual practice must be a process of training – of opening and growing rather than simply enduring life. This growth comes down to just one question: Are you getting less stuck on yourself?

Keeping this slogan – unstick from yourself -- close by at all times is a good tool. Whenever you feel upset, unhappy, dissatisfied, in a snit, frozen, constricted, bound – check and see. If you reflect, you may see that the ultimate cause of this unpleasantness is that you are in one way or another stuck on yourself, favoring yourself and your own needs, desires, and viewpoint. Simply recognizing this, opening up just a little, relieves the pressure.

Stop being so stuck on yourself. Open up. Think of others. Try to do something to make them happy. Anything! Something like, “Hello, how are you?” And mean it. The whole of practice comes down to just that.

Looking inward, it sometimes seems that we are making progress, and at other times it seems that the whole effort to have a spiritual discipline has been a waste of time. Sometimes all we notice is that years go by and we seem to be no different than when we began – or even worse. Other times, we think maybe we’re a bit more calm, a bit more aware, a bit more kind. How do we know how we are doing?

Just investigate: Am I less stuck on myself, more available to others than I used to be? Am I thinking positively and generously of others more often? If you are just as stuck on yourself as you ever were, that’s OK. That’s information. You know what you have to do. Invite someone out to lunch. Ask someone how she is. 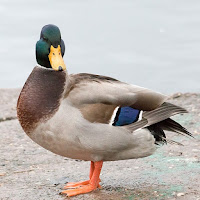 
A monastic asked Zhaozhou, "All the Dharmas are reduced to oneness, but what is oneness reduced to?" Zhaozhou said, "When I was in Qingzhou, I made a hempen shirt. It weighed seven pounds."

Can you see how "I made a seven-pound hempen shirt" is exactly what oneness is reduced to? Zhaozhou could not have more directly answered the monastic's question. Or consider the case that appears as both Blue Cliff Record #73 and Book of Serenity #6:

"It really doesn't amount to much" is the joke -- and saying that to Mallard is letting Mallard in on that joke.


Porcupine was foraging near Stillpond and met Mallard unexpectedly,
"Porcupine!" exclaimed Mallard, "I've wanted to ask you about something. It almost seems that you and Raven have a secret understanding of some kind."
Porcupine said, "We know the same joke."
"Can you let me in on it?" asked Mallard.
"It really doesn't amount to much," said Porcupine.
"Tell me," demanded Mallard.
"Mallard!" Porcupine exclaimed. "You aren't listening!"


"When devoted invocations are sent forth, they are perceived and subtly answered."
And if the invocation isn't devoted?
Or isn't sent forth?
Or, for that matter, isn't invoked?
Still perceived.
Still answered.
Still subtle.